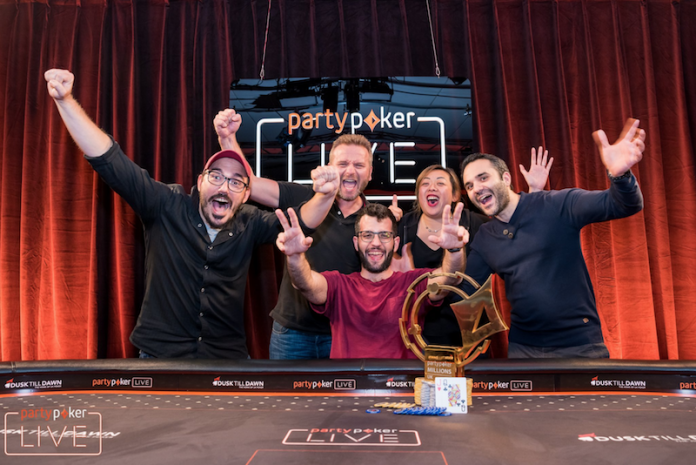 On Sunday, Ioannis Angelou-Konstas topped won the partypoker LIVE MILLIONS UK Main Event for a whopping £940,000. Despite entering the final day with the chip lead, the road to the winner’s circle wasn’t an easy one for Angelou-Konstas, who had to defeated a field of 1,015 entries and top a final table that included Alex Foxen, Tom ‘Jabracada’ Hall, and Sam ‘TheSquid’ Grafton, among others.

The victory proved by far the largest of Angelou-Konstas’ career, as previously the Greek player with two WPTDeepStacks titles had $874,921 in live tournament earnings.

Angelou-Konstas defeated Foxen in heads-up play to claim the title. Angelou-Konstas took out Antoine Labat in third place and entered heads-up play with a lead of 880 million in chips to Foxen’s 132 million. After a double up by Foxen, the two struck a deal that saw Angelou-Konstas take £840,000 and Foxen £720,000, with £100,000 left to play for. Shortly thereafter, the two got the money in on what would be the final hand.

According to reporting on partypokerlive.com, Foxen raised and Angelou-Konstas called to see the flop come down

on the turn. Both players checked and the river was the

, Foxen saw the bad news and was eliminated holding the

Dara ‘Doke’ O’Kearney was next out the door in eighth, and then John Haigh was knocked out in seventh. Both O’Kearney and Haigh were eliminated in three-way pots.

Michael ‘Miw210’ Wang went out in sixth place for £140,000. He was busted at the hands of Angelou-Konstas, who shoved the river of an

board holding pocket aces. Wang tank-called with the

to try and pick off Angelou-Konstas, but he was eliminated instead.

Next out was Grafton in fifth place, who was also busted by Angelou-Konstas.

Angelou-Konstas then sent Hall packing in fourth place when his

held up against the

Falling in third place was Labat, also busted by Angelou-Konstas, and that set up the heads-up battle between Angelou-Konstas and Foxen. As previously mentioned, the final two players struck a deal before Angelou-Konstas went on to earn the title.