In his third appearance at a $10K GGPoker Super MILLION$ final table, online poker legend Isaac Baron (‘westmenloAA’) became the just fourth player in the history of the high-roller tournament to win it twice after he outlasted the 204-entry field and walked away with the $412,449 first-place prize.

With the victory, Baron joins Michael Addamo, Darren Elias, and Lucas Reeves in the elite club of players who have captured two Super MILLION$ titles. It also propels Baron up over $1.35 million in total Super MILLION$ earnings, good enough for a Top 10 spot on the tournament’s leaderboard.

Based on his long list of online poker accolades, Baron was one of the favorites to win it all headed into the final table. However, he first had to deal with Brazil’s Bruno ‘brunovolks’ Volkmann, the current #7-ranked player in the world and chip leader headed into the final table. Like Baron, Volkmann has also previously won a Super MILLION$ and was looking to take his chip lead to claim a second title.

Salas started the day sixth in chips, however, an early confrontation sent him to the rail sooner than he may have expected. After an open from ‘25th Baam’ in early position, Salas flatted in the cutoff with

. After ‘25th Baam’ folded, Salas shoved his 40 big blind stack. After a few seconds ‘Beast2018!’ made the call and he paired his ace right away on the

turn gave ‘Beast2018!’ trips, leaving Salas looking for one of the final two jacks in the deck. The river was the

Over thirty minutes later, ‘7ingls7’ opened in mid-position with

. Right behind him, a short-stacked ‘Nator’ put his final six big blinds in the middle with

. Action folded back to ‘7ingls7’, who snap-called putting ‘Nator’ at risk. The flop came

, keeping ‘Nator’ out front and in position to double. The

hit the turn but the

The pace of play slowed down even more, as nearly an hour of seven-handed play took place. Eventually, ‘7ingls7’ put in a raise from the cutoff with

and when folded to Russia’s Gleb Tremzin in the big blind, he put in his final five big blinds with

. Again, ‘7ingls7’ quickly called the shorter stack. The table watched as the board ran out

, awarding another knockout to ‘7ingls7’ and sending Tremzin home in seventh for $86,706.

Forty minutes later it was a different story for ‘7ingls7’ who, rather than calling short stacks, was the short stack himself. From the button, ‘7ingls7’ shipped his final eight big blinds with

of ‘25th Baam’ in the small blind, who made the easy call. The board

board provided little drama and ended ‘7ingls7’s tournament in sixth place for $112,444.

With five left, the action heated up. When folded to in the small blind, Baron put in a raise holding

. Baron, with the chip lead quickly called and the flop fell

. ‘Beast2018!’ picked up a pair and some extra outs, but Baron’s overpair held through the

At four-handed the stacks were polarized with Baron and Volkmann sitting on the two larger stacks and both ‘25th Baam’ and Pablo Brita Silva looking to double. From the button, the aggressive Volkmann open-shoved his

into both of the smaller stacks. After ’25th Baam’ folded, Silva called with his

, putting Silva in great shape to win the hand. But Volkmann hit one of his three outs when the

hit the turn. The

. Baron made the call and the flop came

giving ‘25th Baam’ some additional straight outs. But the turn was the

and the river came the

Both Baron and Volkmann were deep stacked headed into heads-up play. Although Baron held the chip lead, they were 60 big blinds effective and it looked like fans were in for a lengthy heads-up match. That was not to be the case though as it only took three hands to determine which of these two players would become a two-time champ.

Volkmann raised the button with

and Baron flatted the big blind with

and Baron checked his top pair over to Volkmann who put in a small bet with bottom pair. Baron check-raised his pair of aces and after a few seconds, Volkmann made the call. The turn was the

and Baron checked it over to Volkmann again. Volkmann put out a bigger bet which Baron just called. When the river came the

Baron checked a third time and Volkmann, with a little more than a pot-sized bet left, opted to shove. Having made two pair, Baron called and ended the tournament. Volkmann missed out on becoming the two-time Super MILLION$ winner himself but walked away with a $318,042 payday as the runner-up. 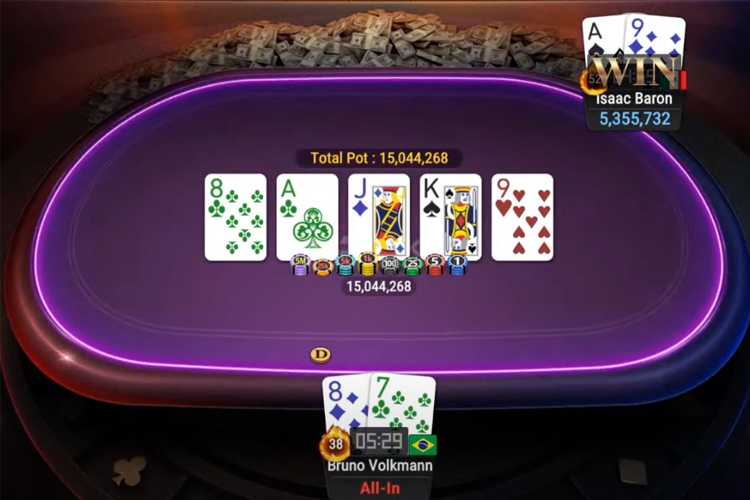