PokerGO’s revival of High Stakes Poker is set to return in 2022 for Season 9 and over the weekend fans were given a first look at some of poker’s high-powered players that have officially locked up a seat in the game.

I will be appearing on High Stakes Poker this season and you will all be very excited to see some of these lineups!

After sitting on the sidelines for Season 8, Daniel Negreanu – who played in all of the first seven seasons of the show – confirmed his return to HSP via Twitter. Then, hours later, Jennifer Tilly posted one of the first cast photos, much to the delight of poker fans everywhere.

As you can see, some of the biggest names in the game will be in action including cash game legends Phil Ivey and Tom Dwan, both of whom were featured last season. Joining them in a return are Jean-Robert Bellande and Bryn Kenney, who made their High Stakes Poker debut in Season 8. 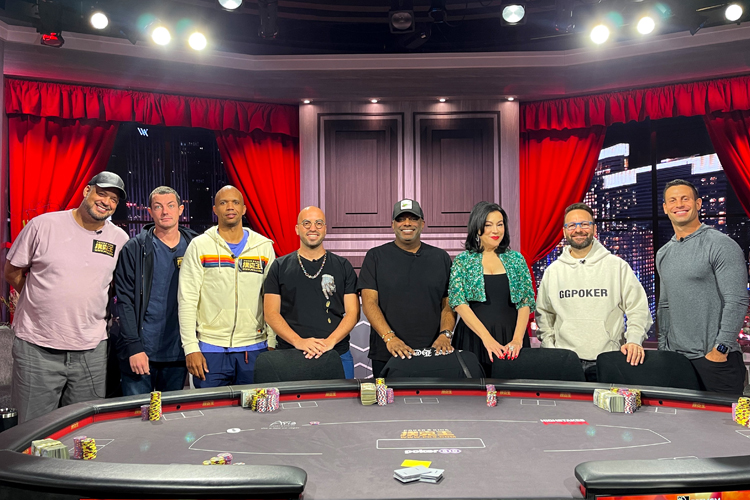 Taking a seat for the first time and pictured to the right of Kenney is Hustler Casino Live regular Krish, who is often introduced as an entrepreneur and collector of rare casino chips. And finally, on the far left, is Garrett Adelstein, one of the most prolific live stream high-stakes cash game players of today.

It’s Adelstein’s first invitation to High Stakes Poker but not his first encounter with the likes of Ivey and Dwan. Earlier this year, Hustler Casino Live broadcast two days of high-stakes play that featured all three players and captured on camera the first meeting of Adelstein and Ivey.

However, that’s not the only members of the cast that were confirmed. Tilly commented on how much fun it was playing with Rail Heaven legend Patrik Antonius…

…and Xuan Liu was sure to snap a selfie with the legend Doyle Brunson.

Can't talk about results, but it was an absolute dream to play with these legends on High Stakes Poker yesterday
🥺 pic.twitter.com/LnKZ5L1xqR

On Monday night, World Series of Poker Main Event Champion Koray Aldemir added some more names to the High Stakes Poker confirmed list when he posted this photo of after his time on set.

Had just flown back to Vegas when I got a call, asking me if I wanted to play some Poker. I didn't really, had things to organize and felt like taking a day off.

Then I got the details.. and I didn't have to think long until I found myself next to these gentlemen😎
@PokerGO pic.twitter.com/GW20bADCzt

Traditionally, High Stakes Poker features minimum stakes of $200/$400 with an $800 straddle or simply $400/$800 blinds, making it one of the highest stakes cash games available for fans to sweat.

Of course, all the players are sworn to secrecy on the results of the taping but it was curious that Negreanu, who has admitted in the past to running badly in his seven seasons (roughly a $2 million loser according to some calculations) posted the following:

Constantly avoiding tough lineups is good for your bankroll in the short term, but long term, it will be difficult to improve as a player.

Accumulating bad habits and not testing yourself can make you worse.