Over the weekend, the Playboy Mansion in Los Angeles, California played host to the FanDuel Playboy Mansion Championship. A total of 80 lineups were entered from the likes of longtime poker player Matt ‘SamENole’ Smith and PocketFives co-founder Cal ‘braskey’ Spears.

In the end, Justin ‘justinmacmahan’ MacMahan took it down, winning the one-day contest with a score of 163.30 points, eight more than the next closest player. His reward was $100,000 after surviving a sweat at the last minute thanks to Mark Trumbo.

Trumbo, who plays outfield for the Baltimore Orioles, was 18% owned, the fifth highest percentage of anyone. However, a late homer from him sent MacMahan into the lead for good. It was a solo shot and Baltimore’s only run of the game, but Trumbo managed to turn in 18.7 points for MacMahan and his other owners.

MacMahan went heavy on the Houston Astros, rostering four players from that team. Catcher Evan Gattis, who was 11% owned and has been on a mini-hot streak as of late, had 25.2 points in Houston’s 6-5 victory over Oakland. Houston second baseman Joe Altuve also appeared on MacMahan’s roster. He was 28% owned and had 6.2 points, the lowest output of anyone on the winning FanDuel Playboy Mansion Championship roster.

For the pitcher position, MacMahan went with Steven Wright from the Boston Red Sox. Wright, who was 7% owned, ended up with 36 points. Seventeen percent of the FanDuel Playboy Mansion Championship field went with Chris Sale of the Chicago White Sox, who ended up getting shelled and only managing 13 points.

Late in the day, ‘Bcalicore‘ was leading, but needed to fade last-minute heroics from Mark Trumbo, Joe Panik, or Hyun Soo Kim. Of course, heroics were exactly what happened. In the end, ‘Bcalicore’ finished in second place and earned $50,000. ‘Bcalicore’ had one of the many lineups that included Sale, but he also had two of the highest-scoring players on the day in Tampa Bay’s Logan Morrison (28 points) and Steven Souza (34 points).

Here were the top 10 finishers: 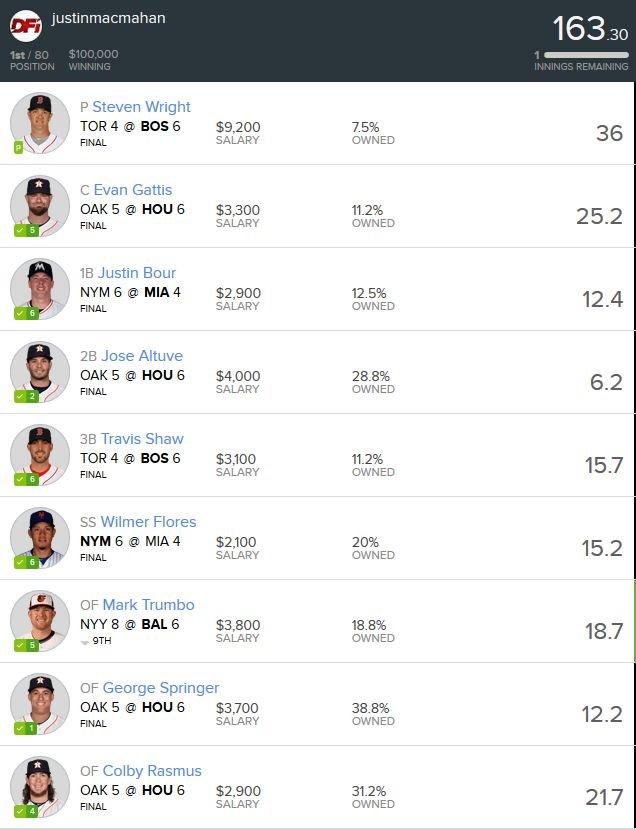