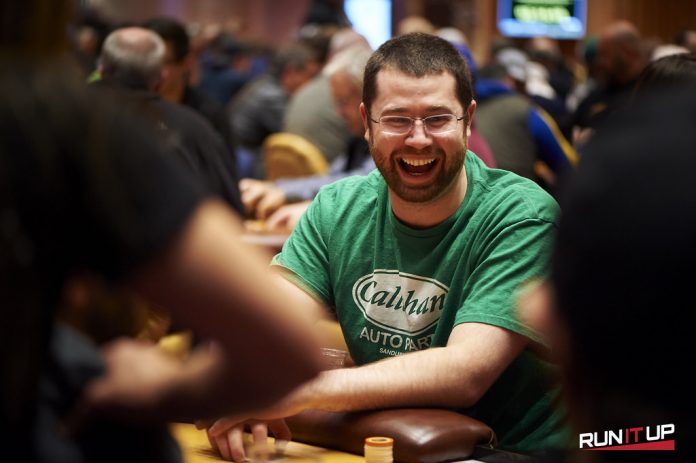 “I’d love to be a poker player forever. I would love to do what Doyle Brunson did, obviously who wouldn’t?”

You may not recognize him now that he chopped off all of his hair, trimmed his bushy beard, and has a swollen black eye from a bike-riding adventure gone wrong, but Arlie Shaban is showing up everywhere in poker right now. The Big Brother Canada contestant turned Enterprise Rent-A-Car 9-5er has a new role as a Herculean. His rise has been fast and it doesn’t look like he’s slowing down anytime soon, especially now that Shaban has the likes of Jason Somerville, the Twitch Poker community, and PokerStars adding fuel to the fire.

“My biggest thing was, after Big Brother Canada I had gone and traveled and partied for a few years,” Shaban said. “I had got myself into a bit of debt and then I had to go work at Enterprise Rent-A-Car, a job I hated. I just wanted to not do a job I hated. I didn’t care if I was making amazing money. At the beginning, it was strictly just that I hated waking up every day, wearing a shirt and tie, going in rain, shine, winter, sun, doesn’t matter — you go in, you work. I was outside a lot. I hated it. I just wanted to not do that. That was pretty much what it came down to.”

“I’m a very highly motivated person, and I realized that the vast majority of people that play poker are losing players and you can learn how to be a winning player if you want to put in more work than your opponents,” Shaban said. “I was willing to do that. I was willing to study. I just figured out the blueprint to success, by talking to Kevin. If you just put in hard work, you study, you game select, and you do things the right way — you have to have proper bankroll management — and I was doing all of those things incorrectly, which most people are. I just fixed those things, and once those were completely fixed, I realized I was making money and that started making me more confident. Once I got the confidence, I was like, ‘OK, I’m going to give it a shot.’ I started making a pretty consistent amount [of money] and I just realized if I combine this start of income that I’m getting from poker with Twitch — and hopefully, I can build a channel as well — I can create a little bit of supplemental income and it will take the stress off it. I did go for both of them at the same time, which I think is hard but helped because my channel did start growing and I did get a little bit of supplemental income and confidence from people watching. That’s what did it for me. I knew I had the ability if I really just tried and I thought it was worth giving it a shot.”

In back-to-back months of August and September, Shaban was announced as an addition to Team RIU as a streaming ambassador and given a mega challenge deemed the “12 Labors of Arlie.”

With the 12 Labors, Shaban must complete various tasks given to him by PokerStars, with each task more difficult than the last. If he completes all 12 by the end of 2018, Shaban will earn a Platinum Pass to compete in the PokerStars Players No-Limit Hold’em Championship in the Bahamas. The Platinum Pass is worth $25,000 and entry into one of the most highly anticipated tournaments in poker.

“The 12 Labors have been absolutely incredible,” Shaban said. “I got challenged by PokerStars a few months back and I just accepted it, not knowing at all what this was going to be about. They choose me because I did my 125-day streaming streak. I had streamed 1,000 hours for my very first time streaming, so for over four months straight. Then, I also streamed for 43 hours in a row. So they reached out to me and they were like, ‘Oh, you think you’re good at challenges? We challenge you to these 12 labors.’ I was like, ‘OK, let’s do it.’ I didn’t know what the prize was going to be for, I just had my pride on the line. When PokerStars challenges you, you don’t really say no. At least I’m not going to.”

One of the challenges Shaban was to complete involved “capturing poker’s most mythological creature,” according to PokerStars, and it was to be done while attending Run It Up Reno. Alongside fellow reality TV contestant Tyson Apostol, Shaban was to capture Chris Moneymaker while racing down a mountain on a bike in Northern Nevada.

With his capture of Moneymaker complete, Shaban had completed seven of the 12 Labors of Arlie and was that much closer to winning a Platinum Pass.

“It would just be unbelievable if I did go to the Bahamas and play in the PSPC, so if that happened I would just keep trying to go on the trajectory that I’m on,” Shaban said. “Everything has been going very well with my poker, with my Twitch channel, and so I wouldn’t want to take any momentum away from that. This is feeding all of the momentum into it. It’s a really cool challenge, the viewers are really enjoying it. I just want to carry the momentum, continue doing this as a full-time career, make sure the Twitch channel very consistently getting content out on there, and make sure I’m studying off stream and growing as a poker player.”

Part of growing as a poker player means playing more live poker events, hopefully in preparation for his trip to the big dance that is the PSPC. During the recent Run It Up Reno event, Shaban earned three cashes on the live felt, including a 15th-place result in the Main Event.

In such a short period of time in poker’s spotlight, Shaban has done a lot. He broke into the streaming world with a bang, landed a place on one of poker’s most popular squads, and it appears nothing more than a formality for him to earn an exclusive Platinum Pass. Where does he go from here and what’s Shaban’s ultimate career goal?

“I would just love to be a part of the poker community my whole life,” Shaban said. “I’d love to be a poker player forever. I would love to do what Doyle Brunson did, obviously who wouldn’t? Play a game you love until you’re old and you’re still playing at the highest stakes against the best players. That’s so cool. For me, I just want to make a living off of poker my whole life. If that involves putting out content with Twitch, or if that involves just playing, I just want to be a part of the community. I love poker so much. I love the community. I’ve made a bunch of amazing friends here [in Reno]. Run It Up Reno is just amazing. Jason Somerville and the team, everyone is so cool, and I just got to be a part of the team. I just want to keep representing amazing companies that I love and watch the community grow for the rest of my life.”

*Photo courtesy of Run It Up.