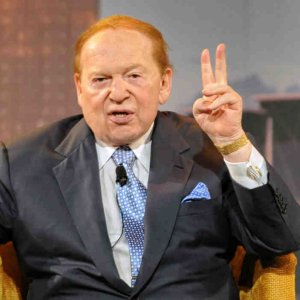 You might recall that Las Vegas Sands CEO Sheldon Adelson (pictured) has pledged to spend “whatever it takes” to rid the United States of online gambling. In fact, he has corralled two lawmakers – Senator Lindsey Graham (R-SC) and Representative Jason Chaffetz (R-UT) – into introducing bills to do exactly that. How much money have Adelson and his Coalition to Stop Internet Gambling spent in 2014?

According to a recent article from OpenSecrets, Las Vegas Sands has been busy on Capitol Hill lobbying lawmakers to its side: “The company paid out $290,000 during the second quarter lobbying solely on the issue of online gambling or the two bills that would ban it. That brings its yearly lobbying total to $460,000, spending in six months just $10,000 shy of what it spent in all of 2008, the year of its biggest-ever K Street splurge.”

Whereas Las Vegas Sands, which owns the Venetian and Palazzo in Las Vegas and Sands Bethlehem in Pennsylvania, has not launched any regulated online gambling sites, Caesars Entertainment is among the companies that has. Caesars, whose Interactive division runs WSOP.com, among other outlets, has also been busy trying to sway Congressmen, according to OpenSecrets.

The site revealed that Caesars “spent $980,000 to advocate on various issues including online gaming in the second quarter, bringing its total so far this year to almost $1.8 million. That’s close to the $1.9 million tab Caesars ran for 2013 in its entirety.”

The stakes could continue to rise as states like California and Pennsylvania grow closer to legalizing internet gambling. And plenty of other companies have dipped their toes into the lobbying pool as well, according to OpenSecrets: “Churchill Downs, Inc… spent $95,000 lobbying in the second quarter, mainly to oppose the ban. Meanwhile, Boyd Gaming, another online gaming pioneer, spent $230,000, mostly on the same issue. MGM Resorts reported spending $240,000 so far this year on several issues, including online gaming, which it supports.”

Little movement is expected on the legislative front on Capitol Hill for the remainder of the year given the upcoming elections in November, when one-third of the Senate and the entire House of Representatives will be up for grabs. We’ll keep you posted on the latest poker legislation news right here on PocketFives.