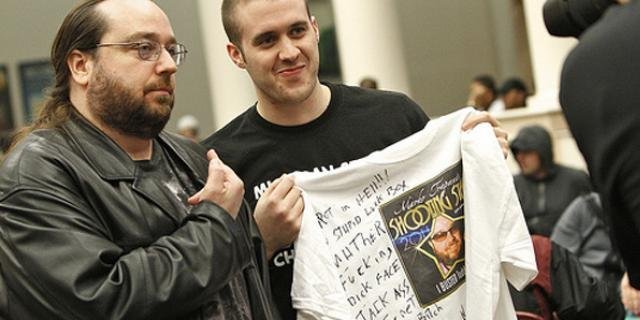 [CAPTION=100%]Jordan ‘Jymaster0011’ Young, with Todd Brunson, was the #1 ranked online player on Black Friday.
(PokerListings photo)[/CAPTION]
Ask any member of the poker community and they can tell you exactly where they were and what they were doing on April 15, 2011, a day that will forever live in poker lore as Black Friday. For the top 10 players on the the PocketFives Rankings that day, their world was forever flipped upside down.

The number one ranked player at the time was Jordan ‘Jymaster0011’ Young, who had ascended to the top spot in the rankings for the third time just two days earlier.

“When Black Friday happened, I was pretty much doing exactly what I had always done on a daily basis for the past few years,” Young said. “I was playing poker, of course.”

A message popped up on Young’s tables saying that real money games were no longer available in his area.

“My life took a turn for the worse when Black Friday hit because I was forced to move out of the country,” Young said. “I had never been away from my family for an extended period of time. When things aren’t going well in poker, it’s really easy to get down on yourself, which made being around my friends and family to pick me back up an underappreciated blessing that I no longer had.”

Nowadays, Young plays much less poker and makes his living in part from poker coaching.

“I never wanted to spend my time coaching, but looking back on it, I wish I had done more of it,” he said.

Right behind Young on the worldwide leaderboard when Black Friday hit was Paul ‘paulgees81’ Volpe, who is now a staple of the live casino scene. Volpe was ranked #1 for three weeks ending on April 11.

“My best friend and backer at the time, Mark ‘dipthrong’ Herm, told me the FBI closed the sites down,” Volpe said. “I remember waking up and thinking, ‘This won’t last long.’ For whatever reason, I thought it was something that would be taken care of quickly and I’d soon be playing again.”


Boy, was Volpe wrong. Five years later, only three US states have regulated online gambling. PokerStars, the market leader on Black Friday, has been back in the US for less than a month.

“My life has changed a lot since that day, but luckily I was able to continue to play poker for a living and continue to be successful,” Volpe continued. “However, I think if Black Friday didn’t happen, I’d probably have ten times the money I have made from poker now. It hurt the game a lot.”

Another American camped out in the top ten that fateful day was Bryan ‘bparis’ Paris, who was 25 years old at the time and had just entered the top ten for the first time.

“When the news hit, I was in shock at first,” Paris said, “but blithely assumed with the innocence of youth that I’d promptly get paid my full balance.”

Paris stuck around through the World Series of Poker that summer and then relocated abroad, this time sans his funds from Full Tilt, which had its gaming license revoked.

“The rest of that year was very hard for me, but I eventually wound up relocating first to Canada and then to the Netherlands and gradually rebuilt my online bankroll from essentially nothing,” said Paris, who spent three years living in Europe post-Black Friday.

Bryan ‘theczar19’ Piccioli was ranked #3 on Black Friday, which happened two months after a $282,000 FTOPS score he had in February 2011. He finished third at the WPT Bay 101 Shooting Star event last month.

Fourth in the world on Black Friday was Mark ‘RenRad 01’ Darner, who is still pouring on online results and final tabled a Six Max event at the WSOP in 2014. Just behind him was Keven ‘Stamdogg’ Stammen, who won last year’s Hollywood Poker Open Main Event and has almost $11 million in combined live and online winnings.

Shaun ‘shaundeeb’ Deeb, who was #6 on Black Friday, has remained a staple of the poker world and, according to many, was at one point one of the finest Open Face Chinese Poker players around. Taylor ‘taypaur’ Paur, ranked #7 on Black Friday, won a WCOOP Second Chance event last year and took down $25,000 Aria High Rollers in back-to-back-months shortly thereafter.

Bjorn ‘kleath’ Kleathersson, originally from Virginia, continues to play online in Malta and was ranked #8 on Black Friday. And two spots behind him in the world was Chris ‘moorman1’ Moorman, the most successful online poker player in history. Five years after Black Friday, Moorman sports $13.1 million in online winnings, $4.1 million in live winnings, and 25 Triple Crowns. He has shown no signs of slowing down.

The top ten on Black Friday: