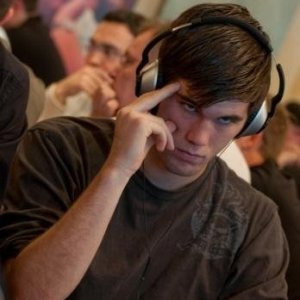 When an unknown sits at the table, I try to minimize my bet sizes with him until I have a better feel for how he plays. This question, in a bubble, as you can see, is unanswerable. You committed all of your chips to an answer you couldn’t possibly have had.

There are people I have taken this exact line against and been shown A-Q offsuit. There are people who would only do this with K-K. We just do not know which one this player is.

Online, I would refer to his check-raise statistic. Less than 5% over a large simple indicates this is generally two pair or greater. You think about it: one time out of ten you are flopping a hand good enough to check-raise, say a set, a nut flush draw, or two pair. He is check-raising half of the time, which makes his range even curter. It’s tough to crack.

20% or higher check-raise indicates this is a good deal of bluffing. You do not have a hand that’s good enough to check-raise and blow up this pot out of position one time out of five.

Also of note would be his Raise First from that position. If it is higher than 20%+, this is an active player. If it is less than 15%, this range connects more often with the board.

Is the board an acceptable check-raising board from his viewpoint? In my mind, this board is less popular to check-raise with German and Dutch players than many others. When I have spoken with them, they are the ones most likely to ask, “What are we representing when we check-raise bluff?”

That doesn’t mean some of the more high-stakes players aren’t capable of it. They have, in my experience, done a good deal of analysis in regards to the number of combinations you could defend with.

Is that possible? If you were three-betting an 11.5% range, which is found often with aggressive online regulars, especially when they are in position and deeper stacked, then you are only flopping top pair, a draw, or better 40.9% of the time, which means you are folding 58.9% of the time. Remember, he needed it to work 56.91% of the time. If he has any draws, even weak backdoors, he’s combining equities here. He’s doing fairly well.

Now, versus you, I think this is a poor play. You have the poker acumen to see the problems in his line: What is he really representing? K-J suited, a set? Would he really check-raise A-K? Most people do not consider one pair a play-for-deepstacks hand in tournaments.

However, in our discussions, you told me two players who you consider better than you said they would have folded your hand here. If you fold top pair, top kicker here, you are folding over 80% of your continuation betting range! His check-raise now looks genius because to some people, “What the hell could he be check-raise bluffing?”

Does he think you’re the type of player to do that? If you and he have history, this is when note-taking becomes especially important. If you identified in your notes, with a written date and tournament description, when you played with him, you might have an idea for how you played that day. If he pegged you as a solid player who wouldn’t get out of line, this could be a monumental bluff.

Yet, does he think that far? Tournament results tracking can tell us this. If he has played a large number of tournaments, especially at lower stakes, and has a small but consistent ROI, he is likely a more by-the-book player. He doesn’t “get out of line” with bluffs that aren’t explicitly recommended in training videos as profitable. If he has a wide variety of results in higher-stakes tournaments, then it’s more likely he came from an analytical cash game background. This bluff makes more sense coming from this type of player, especially when coupled with his nationality.

In general, should I be suspicious in this situation, I call. I don’t see many players who are willing to get it in here with Q-10 anymore. I can count the players on one hand who will three-barrel bluff their chips on such a dry board where they can’t represent many missed draws. Call turn. Fold river.

Many people recommend checking back the flop. I think that’s preposterous given your hand strength and how wide people call down for inexplicable reasons. It’s a defeatist, results-orientated line of thinking and leads your continuation betting range to be ripe for check-raise plucking.

There was a time I recommended flatting here pre-flop. I do not go that route much anymore. Players, for a while, were not squeezing as much as before. They also considered it sacrilege to flat from the blinds with as wide of a range as people play now. The way poker is played in this day and age, you will be on the defensive against more players if you flat here, which I do not like. Still, versus an unknown in a live tournament, this is not a bad option.

Pre-flop online, you have the advantage of examining his four-betting statistic. If it is low or nonexistent, you could three-bet much more accurately to take control of the hand. Sans that luxury, caution is important.

I hope these strategic considerations help you in future similar spots.

By the way, I am going to be doing a project this SCOOP season. I will be recording every single hand I play during SCOOP with commentary. If you would like to get a hold of these videos, send $50.00 to Assassinato (Costa Rica) on PokerStars, TheAssassinato, Panda, City Letter: S on Full Tilt, alexfitzgerald88@gmail.com on PayPal, or fitzgerald_alex@yahoo.com on Skrill. Then, write us at Assassinatocoaching@gmail.com with proof of your transfer details and you will receive downloadable videos as soon as they are available.

Alex Assassinato Fitzgerald has amassed $3,000,000+ in tournament earnings alone. Alex is an instructor at PocketFives Training and can be reached for private lessons at Assassinatocoaching@gmail.com. You can also reach him on Twitter @TheAssassinato and on Facebook at Facebook.com/Assassinato. He currently resides in his suburban home in Costa Rica with his fiance and poodle.