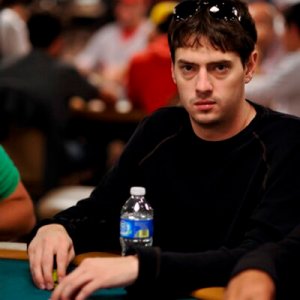 It took 56 hands, but we had our first elimination from the 2014 World Series of Poker Main Eventfinal table. The man who exited first for the second straight year: Mark Newhouse, who called a 3bet from William Tonking pre-flop to see a flop of 2-4-J.

For the second straight year, he’ll leave the final table with no additional cash, but his tremendous poker accomplishment shouldn’t be overlooked.

On the river, ESPN commentator Antonio Esfandiari said he “loved” the bet by Newhouse. “It shows a lot of heart,” said Esfandiari. “He put his opponent on a hand and played accordingly. That’s how you win at No Limit Hold’em.”

ESPN commentator Norman Chad said, “It doesn’t seem possible. What a call and what devastation again for Mark Newhouse.”

A Tweet from Newhouse from July 7 that read “Just bought into the main event day 1c. Not fucking finishing 9th again” popped up in our feed, having been re-Tweeted 117 times and marked as a Favorite 178 times.

Tonking grabbed the Main Event chip lead after the hand, likely igniting the excitement of many fellow New Jersey players:

As you might know, Scott Seiver is coaching Felix Stephensen, leading one person on Twitter to say, “Have to be pretty demoralizing for the villains to see @scott_seiver working like mad on @FelixStephensen rail. #goFelix #WSOP #2Poker.”

In an interview with ESPN, reigning champion Ryan Riess told viewers, “It’s a lot different. When you’re sitting down there playing and concentrating, you can’t recognize all of this commotion going on… It’s really cool.” He said of the crowd noise, “At the table, you’re focusing on the action and not thinking about the fans and what they’re saying.”