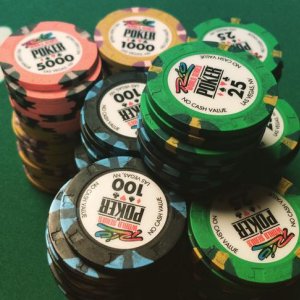 Mozheng “Matt” Guan entered Day 6 of the 2015 World Series of Poker Main Event fifth in chips and spent most of the day at the top of the leaderboard, eventually finishing the day in second place with 14.23 million chips with 27 players left. He ended up in 13th place for $411,000.

One of Guan’s biggest hands of Day 6 came right before the closing bell against Zvi Stern, the man who was chip leader much of the day. Stern raised to 250,000 pre-flop and both Guan and David Peters called. On the flop of 6s-4c-3d, Peters checked, Zvi bet 350,000, Guan called, and Peters folded.

The turn was the 6d and Zvi decided to check. Guan then took the initiative and bet 500,000 chips, which Zvi called. On the river 4h, Zvi once again checked and Guan bet 1.3 million, forcing Zvi to fold. It was a healthy pot, taking Guan’s stack to right about where it was entering Day 7.

As had increasingly become the norm deep in the Main Event, Guan did not have much of a live tournament resume. According to TheHendonMob.com, he had just three cashes in his career and none since 2013. Two of them were for less than $1,200 each.

The one sizable cash came back in 2010 when he finished 122nd in the WSOP Main Event. So, while he Guan does not have a boatload of live tournament success, this was not completely unfamiliar territory for him. At the same time, the difference between the 122nd and the top 27 is fairly significant and not just because of the $200,000 (at a minimum) pay difference.