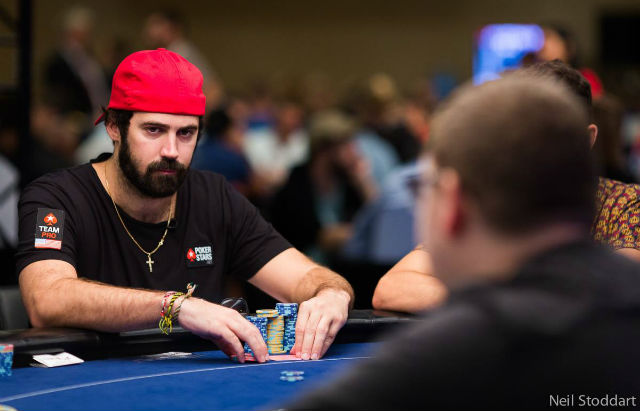 Boasting over 13 million views and nearly 200,000 follows to his Run It UP poker stream on Twitch, Jason Sommerville is by far the most popular poker broadcaster on the site. While his average shows attract several thousand fans apiece, that number can skyrocket when the Team PokerStars Pro finds himself at a final table, playing for thousands of dollars.

With that in mind, Sommerville is hosting a special World Championship of Online Poker broadcast, during which 2016 WSOP Player of the Year Jason Mercier will stream his play live in the $102,000 buy-in Super High Roller event on Sunday. And yes, hole cards will be shown.

Lee Jones, PokerStars Cardroom Manager, revealed that the idea came about after Mercier and Sommerville realized that they would both be in Toronto for the WCOOP. The two Jasons have been friends and business partners for years, and when Mercier mentioned he would be playing the High Roller event, Somerville asked if he’d like to stream it all on Twitch.

“One thing led to another, and here we are,” said Jones.

The $102,000 buy-in Super High Roller event will be the highest buy-in poker tournament ever played online. That fact makes it all the more astounding that Mercier would agree to stream his play with his hole cards exposed (on a fifteen-minute delay). At that elite level of competition, it’s rare to find a pro who would risk revealing his thought process behind hands during what will be an ultra-competitive tournament. Somerville will be in the booth alongside Mercier during the tournament, and will even discuss hands with the pro after the fact. He won’t be giving advice or discussing strategy when Mercier is actively in a hand, however.

“Jason Mercier streaming the event and showing his hole cards gives poker fans an amazing opportunity to jump on board the action and excitement,” said Eric Hollreiser, PokerStars’ director of corporate communications. “On top of that, Jason Somerville has made Twitch the premiere channel for poker fans and knows how to put on a truly great show. All this combined is going to make for some intense Sunday poker watching.”

Mercier is coming off the heels of a fantastic summer performance at the WSOP. His outstanding run started when he won a bracelet in the 2-7 Draw Lowball Championship for $273,335. He went on to take second place in his next tournament, the Razz Championship, then win another bracelet and $422,874 in the HORSE Championship. Those three events, plus an eighth place finish in the Omaha Hi-Lo Championship were enough to earn him the accolade of series Player of the Year.

The Super High Roller action is streaming on the PokerStars Twitch channel, twitch.tv/pokerstars. The event kicks off on Sunday, September 11 at 1:30 PM US (ET). The tournament is a two-day affair, and if Mercier advances, Sommerville will be broadcasting the entire time.

“As a serious poker player myself, I look forward to seeing Jason’s strategy unfold hand by hand and learning from him,” said Scott Ball, Twitch Community Development and Poker Manager. “And of course, Jason Sommerville was the founder of poker streaming and a Twitch legend. With him in the booth, there won’t be a dull moment; it should be a great day for Twitch and poker fans everywhere.”