There was a new face in the PokerGO studio for 2021 Poker Masters Event #9 ($25,000 Pot Limit Omaha) and that was California-based entrepreneur Miles Rampel. Rampel, who decided to made his Poker Masters debut in a $25K PLO event, walked away with what was, reportedly, his first-ever tournament cash of $365,500.

As told to PokerGO, Rampel, who does play cash games, started playing PLO this year but had never bought into any tournament for more than $100. When his buddies brought him out to Las Vegas he thought “You know what, I’ll take a shot.” And what a shot it was, besting some of the game’s top high rollers and making his first Hendon Mob entry a victory at the Poker Masters.

. In the big blind, Rampel looked down at

. Rampel, who had assumed the chip lead, quickly three-bet to 440,000. Ausmus took some time, and decided to call, leaving himself with just 15,000 behind. The flop came

giving Rampel bottom pair and missing Ausmus entirely. Rampel checked it over to Ausmus who checked back. The turn was the

giving Rample diamond flush outs. He led out enough to cover Ausmus’ final few chips. Ausmus took one more look at his hand before tossing them in. The

river was no help to Ausmus who tapped the table and went to collect his $86,000 for fifth place.

It didn’t take long before another player hit the rail. Ten minutes later, Ben Lamb found himself with just 10 big blinds when he opened from the button to 140,000 holding

. From the small blind, Rampel made the call with his

flop gave Lamb a wrap and, once again, brought a pair of deuces for Rampel. Rampel checked it over to Lamb who moved the rest of his 290,000 stack all-in. It wasn’t enough to take Rampel off his hand, and the chip leader made the call. Although technically behind in the hand, with 17 outs twice Lamb was the statistical favorite to win. That changed when the

hit, nothing changed except Rampel’s chance of fading Lamb’s outs. He did just that on the

river, letting Rampel’s pair of twos hold and sending Lamb out in fourth place for $118,250.

The final three players grinded for roughly another hour, passing chips back and forth. Lou Garza, who started the day with the chip lead, took it back, but Rampel stayed close. Sean Winter found his stack dwindling, unable to pick up the key hand that would allow him to get back in the thick of it. His time finally came at the 30,000/60,000 (60,000 bb ante) level. After taking a number of hits to his already short stack, Winter was sitting on just over two big blinds. He raised to 120,000 from the button holding

and was called by Garza in the small blind with his

and Rampel in the big blind holding

gave Rampel trip fours, a pair and a flush draw for Winter, and a pair for Garza. It was checked to Winter on the button and he tossed in his final 20,000. Both Garza and Rampel called. The turn was the

The start of head-up play had Garza holding a slim lead over Rampel, both with more than 40 big blinds. It didn’t take long for Rampel to take the chip lead away from Garza once again, this time he didn’t give it back. He extended his lead to a roughly five-to-one advantage when the final hand went down.

. Rampel made the call from the big blind with his

giving Garza the nut flush draw as well as a straight draw while Rampel hit top pair. Rampel checked it over to Garza who bet full pot, only to be shoved on by Rampel. Garza stuck the rest of his chips in the middle as a favorite. The

came on the turn and Rampel needed to once again fade a multitude of outs, this time to win the tournament. And again, he did that when the

completed the board. In his third straight final table, Garza again falls just short of his first Poker Masters victory, this time as the runner-up for $236,500.

After Garza made his exit, Rampel was mobbed by a few friends on set as they celebrated his victory and $365,500 first-place payday. 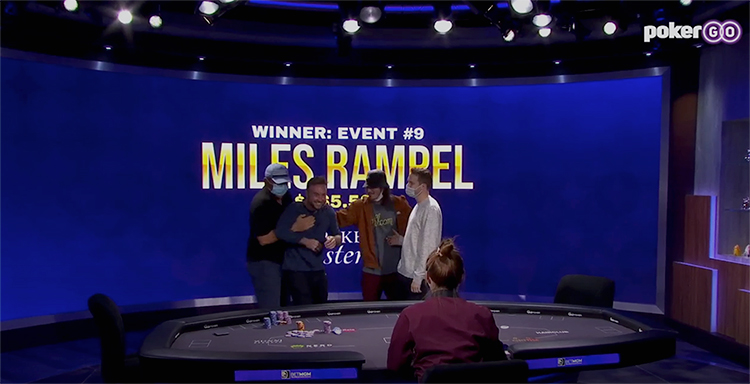