Niall Farrell, also known as ‘Firaldo’ online, is one of just nine players on the planet who have won poker’s live ‘Triple Crown’. With a World Poker Tour, Europen Poker Tour, and World Series of Poker victory to his name, the Scotsman is not only one of the most respected players in the poker community, he’s also one of the most well-liked.

Farrell achieved that lofty ambition four years ago by winning a WSOP bracelet. Since then, he has turned 30, become a father, and, so far, survived a global pandemic – all with his trademark grin in place.

For any British player traveling to Las Vegas, the options for travel have been vast. From quarantining practices to making sure a double vaccination has been administered a clear fortnight before the first event they play. And that’s been only the start of it.

But Farrell is heading to Las Vegas for this year’s World Series of Poker, and like many others traveling from Europe, he has not found it without its logistical difficulties.

“There are three options, but I’ll probably end up going via Mexico,” he laughs. “I’m looking forward to it. We could all do without all the other things we need to do [to get there], but needs must, I guess!”

Those ‘other things’ include the necessity for players to receive both doses of the COVID vaccine before entering the Rio after a 14-day period where the vaccine has fully worked. Farrell is “pro-vaccine”, but perhaps not for the reasons you might think.

“I don’t think it’s a question of whether you agree with it or not. I don’t think the World Series is doing it for the greater good of humanity, I think they’re doing it for liability reasons as a business,” he said. “It’s the same as if they said every time you play at the Rio, you must pay $20 to come in. It’s not like they’re a health board and they’re trying to bring the numbers down in Nevada. It’s their policy. If you want to go, you’ve got to do it.”

Farrell’s positive nature about the vaccine is down to his belief that scientists are doing what is right for people, not just players.

“I’m pro-vaccine,” he says. “Generally, in spots like this, I just trust people who are a lot smarter than me to figure out the best things to do, then do it. I understand some people have their misgivings.”

The Scottish pro, who has over $6.2 million in live tournament winnings alone, admits that after not playing as much since becoming a father, he might have skipped this autumn’s WSOP. After no live series in 2020, however, it’s a must for someone who plans a WSOP schedule every year.

“I look at how many buy-ins I can play, and the World Series is one of the softest things you’ll play all year. It’s one of the biggest money-earners you’ll have all year. You can’t really miss it. I’ll be out there full time and I’m going to play everything $25k and down. If I have a really good summer, I’ll play some of the higher stuff.”

Farrell doesn’t perceive the lack of players who have refused the vaccine as having a huge effect, with the WSOP on target to pull in massive numbers in his opinion. It’s a big change from the first time he played it over a decade ago.

Farrell stayed in a house rented by his backer, and with his poker-playing friends. It was a time of hunger in more ways than one.

“We were all pretty skint at this point so, weirdly, my strongest memory from my first trip to Vegas was finally being allowed to play ‘The Big 33’ on Full Tilt and winning it the first time I played! It’s changed a lot now. Back then, it was a shot to take, now it’s more like a grind where you’re going to play pretty much everything and try to make a good chunk of your money for the year.”

The recent influx of Pennsylvanian events and other smaller-field bracelet events has taken away some of the prestige for a player who admits to being legacy-oriented.

“I think it has diluted it,” he tells us. “Joe Cada has won two bracelets; one was the Main Event and one was another for absolute bombs. If some other guy says ‘Oh yeah, I’ve won two bracelets’ and one was a 38-runner on WSOP PA and the other was a hyper-turbo flip on GGPoker, obviously I’m saying ‘Joe’s count and yours don’t really mate.’”

One of Farrell’s proudest achievements is the WSOP bracelet he won in 2017 that sealed his Triple Crown. It had a final table with players such as Ryan Riess, Claas Segebrecht, Ole Schemion, Antoine Saout, Sylvain Loosli, and Benjamin Pollack, who Farrell toppled heads-up. Farrell admits that his American friends wind him up about his bracelet not having been won on U.S. soil.

“My response to them is always ‘This is how you decide if a bracelet event counts: Was Philip Hellmuth Junior in the field?’ And for mine, he was, so it counts. I was the worst player at the table – that has to count for something!” 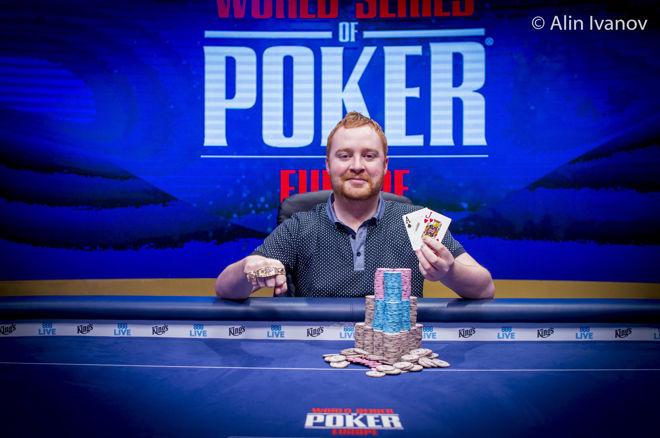 Farrell only traveled to Rozvadov on that occasion because of the chance that he could win the Triple Crown – and because friend and fellow pro Sam Grafton persuaded him to play it. A happy blend of serendipity and skill led to success. Now, heading back to Sin City, Farrell believes that an early win could help kickstart a successful series.

“It’s obviously nice if you instantly win something and you know you’ve got a winning trip. You know that regardless of what happens the rest of the summer you’ve made some money. Maybe it affects how you play subconsciously; it’s a relief to know that you’ve locked up a winning summer and you can start making arrangements to change your dollars.”

This autumn will, of course, be the final time that the Rio All-Suite Hotel & Casino hosts the World Series of Poker and Farrell will miss it.

“As much as we bitch about the Rio, I’ve been going there for a decade, so it will be a little bit sad in a way. Also, one of my favorite Irish bars is going to be in walking distance from Bally’s next year when I bust, so that can’t be good. Having to go on the Strip is not ideal.”

The WSOP Main Event is the one tournament everyone wants to win and Farrell is no different, having played in it nine of the last 10 years.

“It’s the biggest event of the year and although I’ve not personally been super lucky – I got 150th in 2012, my friends have done really well in it, Pius [Heinz] won it and Daniel Strelitz should have won it but punted it off like the little idiot he is.”

It’s clear that Farrell loves everything about the WSOP Main Event. Declaring it the ‘greatest tournament in the world’, the freezeout element of the $10,000 buy-in event is its biggest plus.

“The playing field couldn’t be any more level. It’s you against the world. It’s the tournament I look forward to most every year, and the event you’re saddest to bust. You always have the post-Main Event bender in Vegas which is a bit rough, but it’s a phenomenal tournament.”

Farrell admits to being “on and off a wee bit” when it comes to putting in the practice and has steered clear of higher-stakes games in recent weeks. He has plans to ramp up the action post-WSOP however…whatever the outcome of his epic journey to Sin City.

“I’ve played a little bit to keep some semblance of sharpness about me. When I get back from Vegas, I’m going to throw myself back into it a bit.”

The Triple Crown winner is going to hit Vegas hard and that might mean a lot more time at the felt than in years gone by. The Scottish poker legend’s appetite for a Vegas bracelet is larger than ever, and perhaps the World Series will benefit from the energy that the Scotsman’s presence will undoubtedly provide.