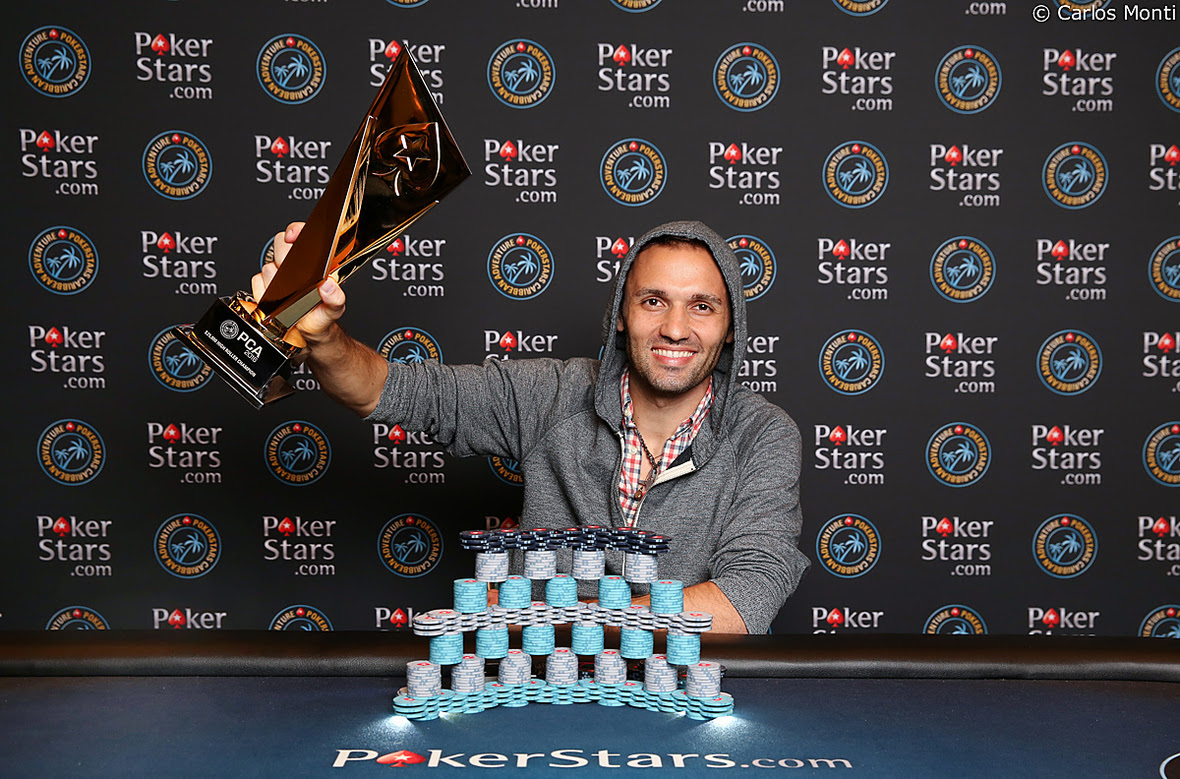 Most High Roller final tables involve a level of conflict. Chip leads go back and forth and eventually one player rises above the rest to win an insane amount of money. That’s not quite what happened Thursday night at the final table of the $25,000 High Roller event at the PokerStars Caribbean Adventure.

Nick ‘FU_15’ Maimone started the final table fourth in chips and, over the course of nine hours of play, eliminated nearly every single player who stood between him and the title to walk away nearly $1 million richer.

“My plan was just be really solid and tight going in and hope a couple of the short stacks would bust. All the ladders were huge,” said Maimone.

Short stacks did indeed bust early on, but rather than sitting back and watching others do the work, Maimone took on the role of executioner.

From early position, Maimone raised to 110,000 and Ben Heath moved all-in from the cutoff for 570,000. Action folded to Maimone, who called and tabled

. Heath was ahead with

flop put Maimone ahead and the

river kept him there, sending Heath to the rail in eighth place.

From UTG, Chance ‘Chances Cards‘ Kornuthmoved all-in for 495,000 and Brian Yoon moved all-in over the top from the cutoff. Maimone called from the small blind. Kornuth showed

flop gave Kornuth and Yoon straight draws but left Maimone in front. The

turn gave Yoon a straight. The

river changed nothing for Kornuth and he was out in seventh.

Working with a relatively short stack, Andrey ‘Zaya‘ Zaichenko moved all-in from the small blind for 830,000 and Maimone called from the big blind. Zaichenko showed

, but found himself trailing Maimone, who showed

runout did nothing for Zaichenko and he was eliminated in sixth.

flop kept Yoon ahead but gave Maimone a straight draw. The

turn put Maimone ahead and the

November Niner Josh ‘asdf26‘ Beckley was the next to go and his run ended in frustrating fashion. Winter raised to 180,000 from UTG, Maimone called from the button, and Beckley called from the small blind. The flop came

and all three players checked. After the

river got Beckley to check again. Maimone bet 525,000 before Beckley check-raised all-in for his last 1,225,000. Maimone called and watched as Beckley tabled

for what he assumed was the nut flush, but Maimone – after taking some time – flipped over

for a straight flush to send Beckley home in fourth.

“I’m not an asshole, but (Beckley) just kind of bothered me a couple of times with his demeanour. He really just rubbed me the wrong way,” said Maimone. “This was a dream spot to not slow roll. So I said, ‘This is a tough one.’ I think I asked him how many chips he had – like a jerk and he called and confidently tabled his ace-five of spades and I was like, ‘I have a straight flush, sorry.'”

With three players remaining, Dario Sammartino moved all-in for 1,130,000 over Maimone’s initial raise to 225,000. Maimone called and turned up

, while Sammartino needed help with

board did nothing for Sammartino and he was out in third, leaving Maimone and Winter to play for the title.

Maimone raised his button to 250,000 and Winter followed that by moving all-in. Maimone snap-called and tabled

, while Winter was way behind with

to give Maimone his first live win.