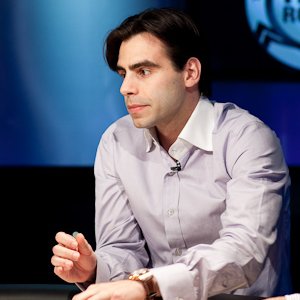 In a series of Tweets, poker pro Olivier livb112Busquet (pictured) seemingly called out the “old guard” of poker. He Tweeted last week, “This idea that current pros ‘owe’ some past group of pros for paving the way or growing the game is just nonsense.” According to a later Tweet, the one person who could receive an exemption from Busquet’s blanket statement is 2003 World Series of Poker Main Event champion Chris Moneymaker.

Moneymaker garnered support from several posters on Twitter, including 2010 November Niner Joseph subiime Cheong, who wrote, “Everyone owes Chris for winning with such an awesome last name.”

Busquet clarified, “If anyone should be ‘thankful,’ it’s pros who were at the right place at the right unique time and made money without having to be good at poker.” “Late Night Poker” host Jesse May responded, “But comparing poker skill in 2014 to skill in 2003 is like harping on Newton for being dominated by Einstein. It’s relative.”

Haralabos Voulgaris said, “Right place right time and a real willingness to be camera whores can and did pay off back then.” Voulgaris promptly called out Phil Laak and Antonio Esfandiari for “going through the Foxwoods buy-in line over and over again to make sure cameras were present.” You can check out the full responses to Busquet’s Tweet here:

Busquet continued to praise Moneymaker and also lauded World Poker Tour founder Steve Lipscomb and hole card camera inventor Henry Orenstein: “Orenstein, Lipscomb, and even Moneymaker were pioneers; many of the stars getting credit for growing poker were placeholders.” Busquet then spouted off two more Tweets talking about ambassadors of the game:

Poker ambassadorship, conceptually, plays a role – no doubt – but let’s not overhype the role or importance of certain individuals

In response to Busquet’s ambassador comments, one person called out his friend, Dan Colman, who has come under fire for ducking the media and refusing to promote poker while at the same time sounding off on message boards about the evils of the game ad nauseam.

Another poster singled out Daniel Negreanu as being a face of poker, but Busquet responded, “Seems like you’re assuming pros are doing this stuff for free? Usually, they are paid. It’s part of their contract to promote, etc.”

Busquet has done a variety of poker broadcasting and won the Estrellas Poker Tour High Roller Event in August for $1.1 million. He has over $6 million in live tournament winnings to his credit, according to the Hendon Mob, along with another $359,000 online.

What do you think? How much do the rising stars of poker, and the community as a whole, owe the “old guard”? And who should be considered an ambassador of the game? Leave a comment here and let us know.