The partnership between 888poker and the World Poker Tour has proved once again to be a fruitful one as 1,087 entries piled into the lobby of the $1,050 WPTDeepStacks London Main Event to take their shot at the six-figure sums that were up for grabs.

After several Day 1 flights, 177 players returned to the 888poker tables for Day 2. It was Brazilian grinder ‘paulinhoo00’ who not only made his way to the final table but navigated a tough final nine that included 888Live London champion Tom Hall and high roller extraordinaire (and 888poker ambassador) Dominik Nitsche to capture the $233,705 first-place prize.

After an open by ‘AllanSheik’ in late position with [ad][ks], 888poker ambassador Dominik Nitsche put in a three-bet from the small blind with his [qc][qh]. The big blind got out of the way and ‘AllanSheik’ four-bet all-in having Nitsche covered. Nitsche quickly called and the players were off to the races. ‘AllanSheik’ hit the [kh][ts][kd] flop hard and it held through the [4c] turn and the [7s] river to eliminate Nitsche in eighth place for $21,740.

Two hands later short-stacked Brazilian Kelvin ‘Kelvin_Kerbe’ Kerber opened from mid-position with [kd][9d]. ‘mylly8’ put in a three-bet holding [ad][th] and when folded to Kerber shipped for not much more. ‘mylly8’ called, putting Kerber at risk. The board ran out [ah][5d][5c][4h][ts] giving ‘mylly8’ top pair and ending Kerber’s run in seventh place for $32,610.

‘mylly8’ was in good shape after that hand, but lost a big pot holding pocket aces to ‘AllenSheik’ who had [ad][8d] when the flush came in. It wasn’t long after that ‘mylly8’ shipped his short stack all-in from the small blind holding [5d][5h]. Tom ‘sheeeeeeeeet’ Hall was in the big blind with a larger stack and the [ah][tc] and so he made the call. The flop came [c][8d][9c] keeping ‘mylly8’ in the lead, but the [7c] turn gave both players a straight, however, it gave Hall the ten-high straight leaving ‘mylly8’ drawing dead to the [qc] river. ‘mylly8’ busted in sixth place for $43,480.

Kovalski put in a raise holding the [ad][5d] and ‘SteliosCy’ made the call from the big blind with [jc][7c]. The flop came down [qs][7d][6d]. ‘SteliosCy’ checked to Kovalski who put in a bet. ‘SteliosCy’ then moved all-in with middle pair and with the nut-flush draw, Kovalski called putting his tournament on the line. The [jh] turn was of no help to Kovalski and neither was the [8h] river, sending him home in sixth place for $54,350.

With four left, Hall found himself short and in need of a double up. His opportunity came when, from the small blind, ‘SteliosCy’ shoved on Hall holding [qh][jh] and Hall made the call with [2d][2c]. The flop came [ac][ts][8d], but when the turn came the [9d] giving ‘SteliosCy’ the straight. It was all over for Hall who watched as the meaningless [kd] hit the river and he fell in fourth place for $65,220.

Then perhaps the biggest hand of the final table took place. From the button, chip leader ‘AllanSheik’ put in a raise holding [ac][as]. Then from the small blind, ‘SteliosCy’ moved all-in holding [ah][kh]. Then, ‘paulinhoo00’ in the big blind re-shipped his stack with his [jh][jd] and ‘AllanSheik’ quickly called – it was a three-way all-in with three players left. The flop came [qh][jc][7h] giving ‘paulinhoo00’ middle set and ‘SteliosCy’ the nut flush draw. The turn was the [qd] improving ‘paulinhoo00’ to a full house. ‘SteliosCy’ was drawing dead and ‘AllanSheik’ was left looking for the last ace in the deck to pull off the win. However, the river was the [6d], eliminating ‘SteliosCy’ in third place for $84,786 and flipping the chip lead to ‘paulinhoo00’ who closed it out roughly 20 minutes later.

The final hand of the tournament was another cooler. ‘paulinhoo00’ and ‘AllanSheik’ got all the chips in the middle with ‘AllanSheik’ holding [tc][th] to ‘paulinhoo00’s [ts][th]. Unlike the previous hand, there was no comeback to be had and the board ran out [as][ks][3h][2d][8h] eliminating ‘AllanSheik’ as the runner-up for $130,440. 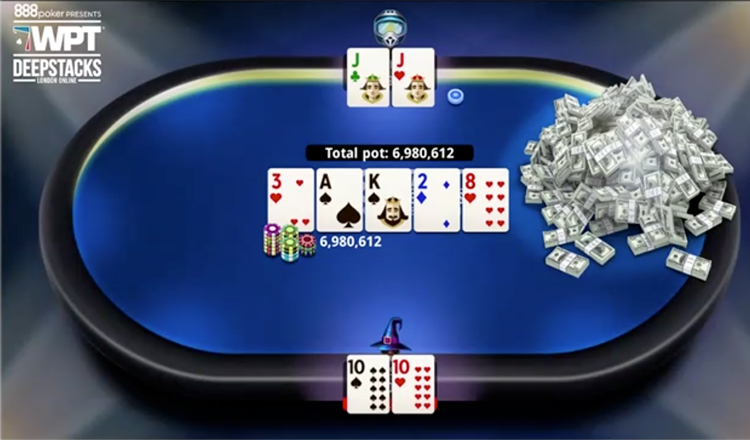