Timing is everything. One can say this about most things in life, but for Phil Beck, a perfectly-timed series of events lifted him to victory in the World Series of Poker Online Event #9 ($400 Six-Max NLHE) for a career-high cash of more than $81,000 and, perhaps more importantly to him, his first WSOP gold bracelet.

“It’s kind of crazy man, I’m in a little bit of disbelief,” Beck said just days after his win. “I’ve got a lot of buddies that are very, very good to incredible at the game, and not a lot of them have bracelets.”

Beck, a construction controller for a local Las Vegas construction company, has spent plenty of time over the past 15 years that’s he’s lived in Las Vegas as a local tournament grinder. Originally from Indiana, Beck made a move to the desert after graduating from Purdue, to play golf, play poker, and earn his Masters in Accounting from UNLV.

“My first weekend here in Vegas 15 years ago I chopped my very first tournament at the Sahara. So I got the false sense that poker was easy,” he said.

But as plenty of poker players know, early wins don’t always equate to long-term success. While Beck had plenty of ups and downs, the big money and a resume-topping win seemed to elude him. Four years ago, he doubled down and committed to playing more. He estimated that in 2018 he played 300 tournaments. His Hendon Mob profile began to rack up scores and, according to his own records, in 2019 he earned a seat at 55 final tables and booked 19 victories in smaller local tournaments. He even made a pair of deep runs in WSOP live events, getting into the latter days of the 2019 WSOP Colossus and the $600 DeepStack Championship. But it seems the time for Beck’s breakthrough just wasn’t right.

“Just to get that close to pretty insane money…it was just kind of stupid. But I didn’t get discouraged, There were so many times I thought I’d just quit and never play again. Not necessarily because I was losing money or anything, just because of the frustration. But I didn’t give up.”

Days before WSOP Online Event #9, Beck misclicked. He thought he entered a smaller online event but the tournament he registered for was the $50 rebuy on WSOP.com. Entertaining family at his house, he says he was hardly focused on the tournament, but he ran up a stack the next thing he knew. And with his father and brother looking on, his misclick turned into a final table. Then, his final table turned into a win – one of his largest online scores to date – for more than $13,000.

“Had I not won that tournament on Wednesday, two days before, I almost certainly would have waited until the last second to deposit a couple bullets onto WSOP. So I would have registered 30 seconds later, or two minutes later and then….just the Butterfly Effect…I would have had a completely different seat.”

For Beck, it all clicked. He turned the seat he did get into the tournament of his life. Multi-tabling on his phone while playing live at the Venetian, Beck battled through the online field of 1,217 entries, taking it one hand at a time.

“I wasn’t really focusing on the end results,” he recalled. “I was just focusing on making good decisions, making the best decisions I could every single time. And I didn’t get too high or too low.”

Small fist pumps after big double-up was all he let out while building his online chip stack in the middle of the Venetian Poker Room. Although Beck didn’t make it to the end of the live Survivor tournament, he busted out at just the right time so he could race back to his apartment and continue his grind to WSOP gold.

As the field began to dwindle Beck got that feeling, the one where something magical might happen. He tempted fate, took a couple of screenshots, and posted on his Instagram: “25 People Left. Gold Bracelet?”

He made the final table and with five players left, Beck put a bad beat on an opponent when his pocket nines bested ‘Daaanutzzzzz’s pocket tens. After that, there was no looking back. He remembers how fast the final hand played out and without really realizing what had happened in the hand, the animation pushed the pot his way: “I was like ‘holy shit. I’m a bracelet winner’.”

“I was actually really happy with the way I played the entire tournament, with one exception. I made what most people would say was a loose call,” he said referring to the pivotal hand. “So anyway, I’m not crazy about that decision…After that, I was really happy with the way I played. I felt like I kind of dominated the table. I was talking to my parents and I told my mom if the phone rings at four in the morning it’s because I finished at least first or second. And then I told my dad the same thing to my dad.”

Beck’s dad, Harold, who also makes his home in Las Vegas (as opposed to his mother who still resides in Indiana), is who Beck picked up poker from in the first place.

“I remember being 10 years old and playing Five Card Draw with my dad a the kitchen table for pennies, nickels, and dimes,” he said, adding that the moment he called his father after the win was “one of the best of my life.” Beck has since given his father the WSOP gold bracelet where it sits proudly displayed on a bookshelf. 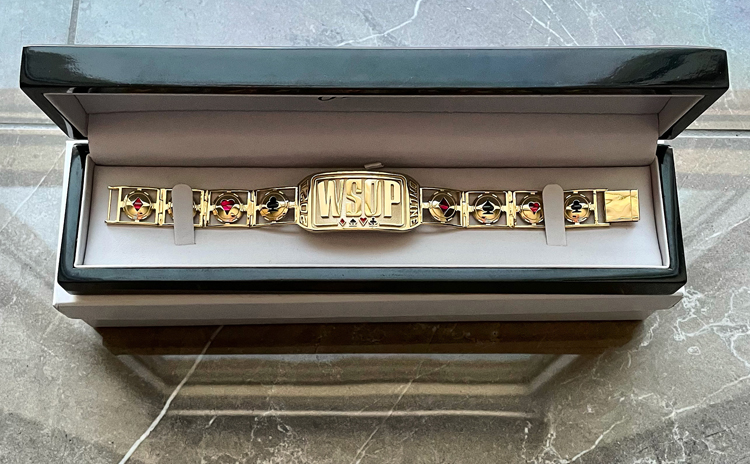 “Then [in college] I remember walking into the computer lab in my fraternity and one of my buddies was playing poker on the internet. I’ve always had a knack for strategy games, like figuring out strategies to beat my opponents – trying to understand their strategy and counteracting it.”

To that end, and with his Masters in Accounting, one might think that Beck – being a numbers guy – would dive deep into GTO strategy. Embrace the math behind poker. But when it comes to adding it up, Beck leaves the bulk of his degree at his full-time job and instead considers himself an exploitative player.

“As much of a numbers guy as I am, pretty much all of my mathematical problem solving with respect to poker is still more intuitive. Even like my brain seems to work through the problem without my conscious understanding. The last four years I’ve become much more of an exploitative player and my results have gotten just way better playing more exploitatively.”

Looking ahead, Beck has some definite plans on what comes next. He will take a little time off when he needs to be in the mix on some of the bigger field weekend events at the live World Series of Poker. Also, never having had the bankroll in the past, with a score four-times anything he’d won in the past, he feels like the timing is right to play in his first WSOP Main Event.

“You know, if something would’ve happened just a little bit different, I would have been in a different seat,” Beck said, still in awe of what had happened to him. “Of course, I mean, it’s like that your whole entire life.”