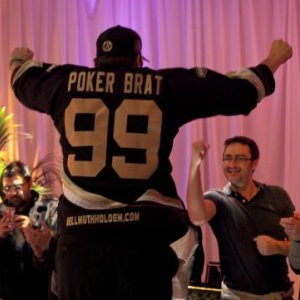 Phil Hellmuth (pictured) extended his own record by winning his 13th World Series of Poker bracelet on Thursday. Hellmuth emerged victorious in the prestigious WSOP Europe Main Event and won a little over â‚¬1 million. “The Poker Brat” was anything but bashful in an interview with WSOP officials following his big win, which marked his second bracelet of 2012, saying, “I played the best poker of my life in this tournament. My game is constantly evolving. I tried some new things out that really worked this time. My game is never the same. You’ve got to constantly be improving, and that’s what I do.”

Hellmuth had a commanding chip lead entering heads-up play and only needed a handful of pots to close it out. In the end, Sergii Baranov‘s A-4 could not overcome Hellmuth’s A-10 and, as they say, the crowd went wild. As if Hellmuth needed anything else to smile about, he’s now in the lead in the 2012 WSOP Player of the Year race.

Hellmuth gleaned on Twitter when all was said and done, typing, “Wow!!! Just Won Bracelet #13! The WSOPE Main Event no less, HIGH AS Akita right now!”

Explaining a recent string of irony was ESPN poker commentatorLon McEachern, who joked on Twitter, “OK I’m 2 for 2. @MagicAntonio was supposed to work One Drop with me and @Phil_Hellmuth the WSOPE final table #reversecooler.” Both scheduled commentators won their respective events, Hellmuth setting a new mark for bracelets and Antonio Esfandiari becoming tournament poker’s all-time money leader. 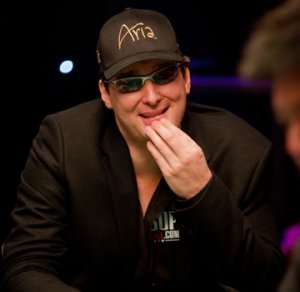 Others commending Hellmuth on Twitter included Erik Seidel, who acknowledged, “Congrats to the great @phil_hellmuth, he keeps this up we are all going to have to start giving him some credit. #sickwin.” Meanwhile, B.J. Nemeth did what any poker reporter would do, drop stats: “@phil_hellmuth may be old school, but he won 4 of his @WSOP bracelets in the last 7 years. How many new-school critics can match that?”

Hellmuth captured bracelet #12 in June in a $2,500 Seven Card Razz tournament in Las Vegas before coming in fourth in the $1 million buy-in Big One for One Drop three weeks later. He has a record 94 in the money finishes on WSOP felts, 18 more than the next closest player, and has banked over $10 million in winnings in his WSOP career.

There has been a considerable amount of chatter on PocketFives about Hellmuth’s big achievement. Click here to weigh in.