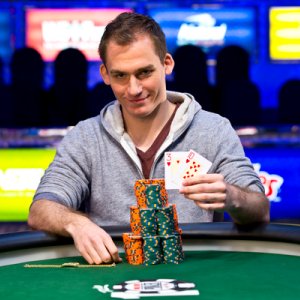 Justin ZeeJustinBonomo (pictured) earned his first World Series of Poker bracelet on Wednesday in a $1,500 No Limit Hold’em Six-Max event (#11) that featured a final table entirely composed of PocketFivers. What started as a field of 1,587 players, up 50% year-over-year, was whittled down to 10 by the time Wednesday rolled around. Bonomo had the second largest stack when play began and ended up pocketing the top prize of $449,000.

Mike SowersUNCC Sowers, also in search of his first gold bracelet, held a 7:2 chip lead entering heads-up play, but Bonomo battled back. As coverage on WSOP.com put it, “Sowers would not give up without a fight, doubling up a remarkable six times after being left with just a handful of chips.”

In the last hand of the tournament, the money went in on a flop of 4-8-7, all hearts, with Bonomo holding 10h-3h for a flush, while Sowers had Qh-10c for a queen-high flush draw. A diamond and spade completed the board and Bonomo Tweeted when it was all over, “Wow, I’m still in shock and already slightly drunk. Thank you so much to everyone that supported me!”

Bonomo has had an impressive start to the 2014 WSOP, finishing second to Tuan Le in a Limit 2-7 Triple Ball Lowball event last week for $219,000 and then winning on Wednesday. He told WSOP staff, “After coming in second again the other day, I started thinking that maybe I shouldn’t worry so much about winning the bracelet and just concentrate on the money. But then to have this actually happen, I see how important it is. It feels incredible.” 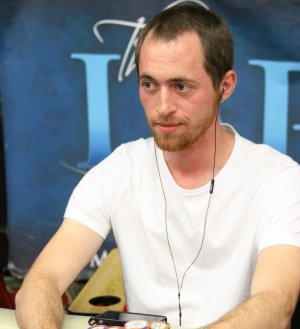 The Six-Max event featured six PocketFivers in the final 10 and, amazingly enough, all of them made the final table. Taylor taypaurPaur was eliminated in sixth place after coming out on the short end of a race with queens against the Big Slick of Daniel Deoxyribo Strelitz. Paur was ahead until a river king ended his tournament.

Niel fly44Mittelman hit the deck in fifth place after Sowers (pictured) check-raised all-in on a flop of 4-7-5. Mittelman called all-in with queens and was ahead of Sowers’ nines, but a one-outer on the river gave Sowers the win in the hand. Then, Lance kingpin023 Harris open-shoved pre-flop with J-10 and Sowers once again was the executioner, this time after making the call with A-Q and holding on.

Finally, Strelitz was booted in third place after running queens into Sowers’ aces to set up heads-up play. Here’s how the final table cashed out: 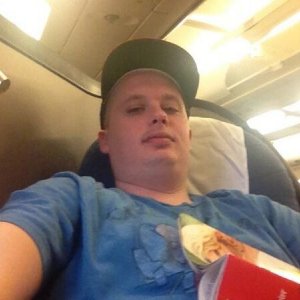 PockeFivers are also dominating the field of a $10,000 No Limit 2-7 Draw Lowball event (#13), with Paul paulgees81 Volpe (pictured) leading the way with seven players remaining. The tournament, which had a field of 87, will cough up a top prize of $253,000.

Adding more intrigue to this event is the presence of Daniel Negreanu in third place heading into the final day. Negreanu, if you’ll recall, teamed up with Phil Ivey to offer anyone a 1:1 bet that the pair would win a bracelet in 2014. It seems as if the bet could pay off after just 13 events after many had mocked the likelihood of a bracelet win.

Here are the seven remaining players, featuring a host of brand names:

Stay tuned to PocketFives for the latest WSOP news, sponsored by Real Gaming.