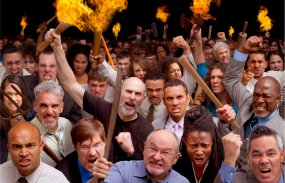 The final numbers for the 2015 World Series of Poker Colossuswere unveiled on Sunday night and, although the tournament broke records across the board, a chunk of the community was outraged over the 5.7% of the prize pool allocated to first place. Meanwhile, 2,241 entrants of the 22,374 who entered will finish in the money, with a minimum cash of $1,096.

WSOP’s Seth Palansky told PocketFives on Sunday that the payouts for the $565 buy-in tournament that had an $11.1 million prize pool should come as no surprise: “It’s the same standard payout we use. Just look at any other of our events and adjust for the number of players and spots paid… The mathematical formula is called the Golden Ratio. All correlate up and down in relation to other places.”

We did the math. Here are the first place prizes and the percent of the prize pool allocated to the winner for each of the four events to finish thus far at the 2015 WSOP. However, no event approached the 22,000-plus entrants the Colossus had:

Twitter was ablaze with players saying the 5.7% to first place was too low and that too many places paid out. Take PocketFiver Blair blur5f6 Hinkle (pictured), for example, who Tweeted, “Some poker players were calling the #Colossus WSOP event the lottery. After payouts, it’s been downgraded to scratchers tickets.”

Allen albari Bari added, “The 2,200 people that cash in the colossus should do the right thing and hand the winner $150.” Bari and Hinkle are both WSOP bracelet winners.

WSOP officials were responding via Twitter late into Sunday night. WSOP Vice President Ty Stewartwrote, “We like getting praise, but sometimes you have to do the right thing. Going top-heavy for PR value + short-changing thousands would have been worse… I think it’s dangerous to look at one pay spot in isolation. Shouldn’t look top down, gotta look bottom up all the way up the tiers.”

Another explanation from WSOP’s Twitter account was released on Sunday: “It’s the principle of what goes up, must come down.The more you pay (a record 2,241), the less for top. Winner gets 1,130 ROI, highest ever.”

WSOP officials told PocketFives that payout structures were posted ahead of time, but we were unable to locate any information. The conversation on Twitter seemed to insinuate that the payouts were being done on the fly given the number of entrants was unheard of in live poker. As Stewart put it, “There is no roadmap 4 paying 2,241 players.”

What do you think of the Colossus payouts? Comment here and let us know.