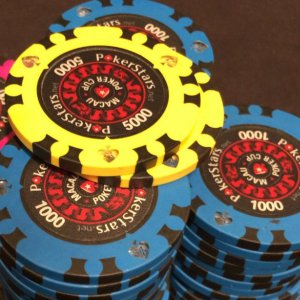 If you’re an avid reader of PocketFives, then you probably already know that PokerStars, the largest online poker site in the world, was recently licensed in New Jersey to offer real money games. The site is expected to launch sometime in the beginning of 2016 following a short test period.

Players in our New Jersey pokercommunity have been buzzing about the prospects of PokerStars launching despite a strike against its worldwide dot-com site that’s entering its third and final day. Recently, several PocketFivers reported that PokerStars was actively surveying players, which is not the first time this has occurred.

1. Are you aware that playing online poker for real money is now regulated in the state of New Jersey?

2. Are you aware PokerStars now has approval to operate real money poker games in New Jersey?

3. Have you seen any advertising related to online poker in the last three months?

4. Are you currently (within the last three months) playing online poker for real money in New Jersey?

5. Which of the following online poker sites have you played on for real money in New Jersey in the past six months?

6. How often do you play online poker for real money?

7. How much time per week do you play online poker?

8. Have you ever made a real money deposit with any of the online New Jersey poker sites that you play with?

9. Which of the following payment options have you ever used to deposit?

10. Have you encountered any problems when setting up an account to play online poker in New Jersey?

11. Which of the following online poker game types have you ever played in the past six months?

12. And which game type have you played the most in the past six months?

13. Over the past two years, PokerStars has introduced a variety of new poker game types and innovative software features. Which of the following are you aware of?

14. Which devices do you ever use to play online poker?

15. Have you played online casino games for real money on any regulated sites in New Jersey?

As you can see, the questions cover an array of topics, including brand awareness, depositing, game selection, play habits, technology, and software. The survey was emailed to New Jersey players who formerly had a PokerStars account.

Again, when the site will launch remains to be seen. When PokerStars does debut, it will join a marketplace that already includes PartyPokerand 888.

Initially, players in the Garden State had a variety of issues signing up for regulated rooms, including failed geo-location and rejected credit card transactions. The former still appears to be an issue for some, while the latter has been partially solved by the introduction of a brand new credit card code for licensed internet gambling sites.

Stay tuned to PocketFives for the latest New Jersey news.