PokerStars has found a way to turn back time.

Not literally of course, but the online poker giant’s latest innovation, Unfold, gives players the opportunity to possibly correct a big pre-flop mistake and go back and unfold their folded hands after seeing the flop.

“This has never been done before,” said Severin Rasset, Director of Poker Innovation and Operations for PokerStars. “Unfold means more action and opportunities for players, reducing the all too familiar sinking feeling of making the correct pre-flop laydown, only to then find you would have flopped the nuts. We’re very excited to offer something new and completely different.”

Here’s how Unfold unfolds: Pre-flop play takes place like it normally does in No Limit Hold’em. Players opt to play for the main pot or click the fold button and, like normal, the flop is dealt. If a player sees a flop they wish they would have kept their cards for, they can change their mind and “unfold” their cards to play for a side pot called the “Unfold pot.” The Unfold pot is made up of antes taken from each player at the beginning of every hand. The ante size, and thus the Unfold pot is determined as a percentage of the big blind. 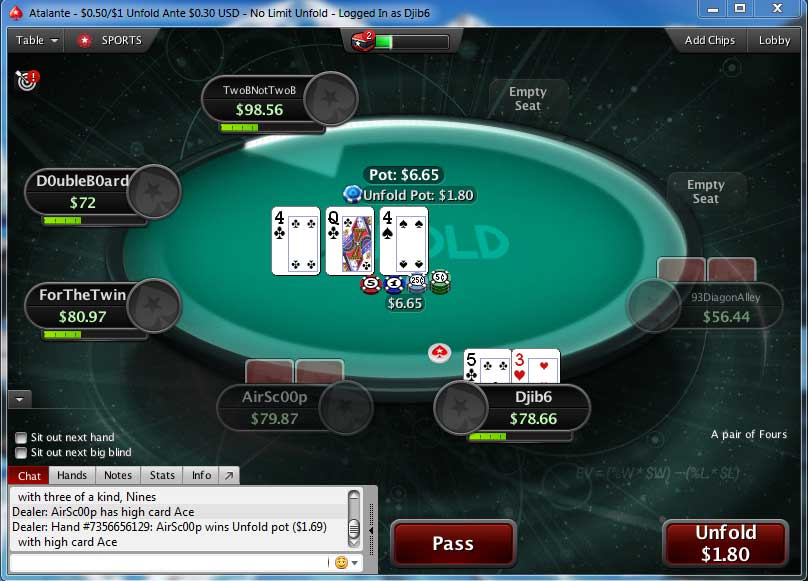 Like just about every player who has played a hand of No Limit Hold’em, PokerStars Ambassador and Twitch streamer Felix Schneiders knows the feeling of wanting to retrieve his folded hand from the muck. “There have been so many times at the tables where I’ve wished I could go back and unfold my hand when I’ve realized I’ve hit a winner,” Schneider said. “Now I can actually do it, which is super exciting! It’s a really engaging format and keeps players entertained and sweating it out in the side pot. I think it’ll also be very funny to stream on my channel and I can’t wait to show my community.”

Not every hand is going to have an Unfold option. If the pot is determined pre-flop or if it’s more of a family pot with fewer than two players folding pre, the option is void. Also, once the flop is revealed if no players actually opt to unfold, then the side pot goes away. In all of these cases, the ante that is taken from each player is returned to them.

One of the players who will be mixing it up in the limited-time format is PokerStars Ambassador Fatima Moreira de Melo.

“I feel way more comfortable folding hands knowing that there’s great potential to hop on to the Unfold pot if I want to,” de Melo said. “I remember playing a World Series of Poker event about fives years ago and I folded pocket 3s pre-flop and the other players went all-in aces against queens, and I would have win the hand with a set of 3s! This was for the chip lead and I was like ‘oh my god, why did I fold?!’ Well I had to fold because they went all in pre-flop. The Unfold button would have definitely been nice there!”

Unfold is currently available under its own tab in the PokerStars lobby on the majority of PokerStars clients.