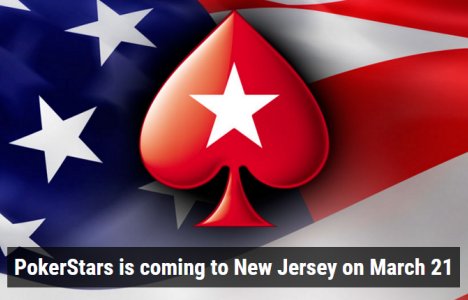 The long-awaited return of the PokerStarsbrand to the US market is here… almost. Amid the hoopla of the ongoing Global Poker League draft, which is taking place in Los Angeles, officials from Amaya Gaming’s headquarters in Montreal dropped a bombshell.

“PokerStars is the global leader in online poker and trusted by its customers for its robust and innovative technology, world-class security, and game integrity. We are honored and excited to now bring these experiences to New Jersey,” said David Baazov, Chairman and CEO of Amaya Gaming. “We’re also thankful to Morris Bailey and the fine team at Resorts Casino Hotel in Atlantic City and look forward to a successful collaboration.”

Morris Bailey, owner of Resorts, added, “Resorts Casino Hotel continues to be the preferred Atlantic City partner and home for outstanding global brands. First with Mohegan Sun and Jimmy Buffett’s Margaritaville and now, with PokerStars joining that portfolio, Resorts is poised to offer players the best online and brick-and-mortar casino experiences anywhere. We expect that the launch of PokerStars will further spur the positive momentum we have already made in the New Jersey online gaming market.”

PokerStars left the US market entirely on Black Friday in 2011. Its parent company, Amaya Gaming, received a six-month transactional license to operate in New Jersey last September. In order to launch, PokerStars had to repay former New Jersey players, remove four staffers, and report regularly to the New Jersey Division of Gaming Enforcement, or DGE, among other requirements.

Also last September, Amaya received the green light to launch its Full Tilt brand in New Jersey, but no indication has been given when or if Full Tilt will be unleashed. Outside of the US, PokerStars and Full Tilt are combining liquidity sometime this spring, with preference being given to PokerStars’ software, so it’s conceivable that Full Tilt will not launch in New Jersey any time soon.

According to Thursday’s press release, Amaya expects to conduct a testing period with DGE that will take place in mid-March before the 21st. If successful in beta, the rollout should go on as planned on March 21.

PokerStars will be available in New Jersey on desktops, mobile devices, and tablets, and one tournament mentioned by name in the press release was the Sunday Special.

It should be noted that New Jersey players will nothave access to games like the Sunday Million, WCOOP, and SCOOP, as the site is only intrastate in New Jersey and not connected to the rest of the world in any way other than using the same software.

Spin and Gos will be available in New Jersey, as will online casino games like blackjack, roulette, baccarat, video poker, and slots.

New Jersey players who already have a PokerStars account can create one on PokerStars NJ by using their existing user ID and password. Until May 31, according to the site, “We will credit you with a welcome offer of a VIP status, a play money chips balance, and StarsCoin based on your play history.”