In recent days, PokerStarshas been reaching out to former New Jersey VIP players and meeting with them via a series of summits in Jersey City and Atlantic City. The site, which Amaya Gaming purchased along with Full Tilt Poker three months ago, appears on track to enter the New Jersey market by the end of the year and perhaps as soon as next month.

The Atlantic City meet-up was on deck for Wednesday from 12:30pm to 2:30pm local time at the Landshark Bar and Grill at Resorts, according to a post on Two Plus Two. The Jersey City meet-up took place on Monday at Hyatt Regency’s Vu Lounge.

The e-mail sent to players read, “As a valued former PokerStars VIP in New Jersey, we would like to invite you to meet two members of PokerStars’ management who will be in the area next week. They will be hosting two discussions in a casual setting with the goal of meeting the New Jersey player base and inviting feedback on any topics or concerns you as a player may have.”

The e-mail continued, “The meetings will be in an open house format and you can drop by at any time during the scheduled sessions. RSVP is not required. However, if you know in advance that you’ll be attending, please let us know at which location we can expect you.” 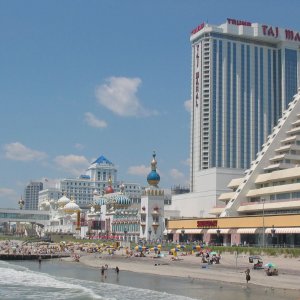 One PocketFiver from Atlantic City was contemplating attending the PokerStars meet-up, but would have to miss an event during the ongoing Garden State Super Series on Borgata Pokerand PartyPokerin order to do so. He posted in our New Jersey poker community, “Anyone get another invite from Stars? Would involve taking a GSSS night off, so curious about the exclusivity before I decide/RSVP, but I do love PokerStars, so will probably do it anyway.”

One person who attended Monday’s session told PocketFives that he was “a little disappointed,” adding, “It was a marketing questionnaire to find out the status of the New Jersey poker community.”

One player who attended the meetings this week told PocketFives, “They answered a lot of general questions but were hesitant to lock in to anything in terms of an opening date, as they are still going through the licensing process. But, they did mention that once licensing was approved, it would probably only take a few weeks to be up and running.”

The same player added, “They wouldn’t or couldn’t go into much detail on anything relating to opening promotions, rewards, or rakeback as of right now. They had a mock/tentative MTT schedule printed up for eyes only. It was a fuller schedule with guarantees in line with what we currently see being offered, just a wider variety of buy-ins, guarantees, structures, and tournament styles. They seemed very keen on adjusting guarantees accordingly once the player pools and volume was established.”

The review of PokerStars’ application for an operating license in New Jersey was suspended last Decemberafter the site had agreed to partner with Resorts. In June, Amaya Gaming bought PokerStars’ parent company for almost $5 billion, possibly paving the way for the world’s largest online poker site to enter New Jersey pending approval.

As part of Amaya’s transaction, Rational founder and CEO Mark Scheinbergand “other principles” agreed to resign. However, “Rational Group’s executive management team will be retained and online poker services provided by PokerStars and Full Tilt Poker will be unaffected,” so it remains to be seen if regulators will be satisfied by the changes made at PokerStars and Full Tilt.

We’ll keep you posted on the latest poker news right here on PocketFives.