Thanks for following our live blog coverage of the PokerStarsNJ launch. 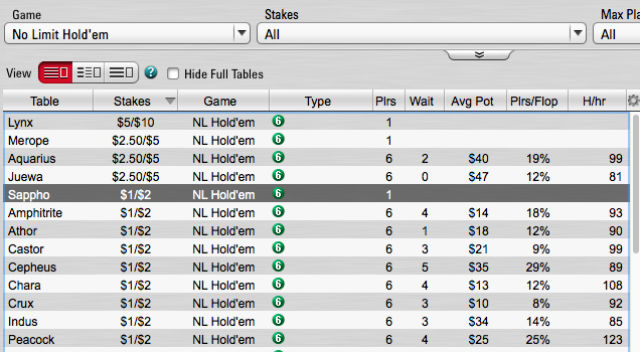 The biggest guarantee of the night was in the Nightly Stars $100. With a $10,000 guarantee the event needed 109 players to avoid an overlay. With another 58 minutes of late registration available, there are 115 players in the event, making the guarantee easily. 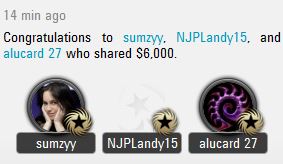 6:52 PM: One of the products that U.S. players will find new on PokerStarsNJ is the Spin N Go. The Hyper Turbo sit n gos, which are played three-handed, do not have a set prizepool. Before play begins players watch a spinning wheel with prizes ranging between two and 10,000 times the buy-in. Just before 7 PM three players signed up for a $5 Spin N Go and wound up splitting $6,000. ‘sumzyy’ took home $5,000 for winning and ‘NJPLandy15’ and ‘alucard 27’ each earned $500 for finishing second and third.

If you don’t already have a PokerStarsNJ account you can sign-up here and be ready to play as soon as you’re inside the state of New Jersey.

5:43 PM: Six full days before their first “Sunday Major”, PokerStarsNJ has a player registered for their marquee Sunday event, the Sunday Special. ‘RevelOwner‘, who has been active on the site during throughout the day, signed up for the $200 buy-in, $50,000 guaranteed event.

The full PokerStarsNJ tournament schedule includes regular daily events with buy-in from $5 to $100 and guarantees as high as $10,000.

4:22 PM: Chris Moneymaker is known for winning the 2003 World Series of Poker Main Event, but he’s not just a one trick pony. Moneymaker, playing under the screen name ‘Money800NJ’, is currently playing $1/$2 Pot Limit Triple Draw. And he’s making hands like a boss.

3:41 PM: Jason Somerville, a Team PokerStars Pro, is in New Jersey and started streaming on Twitch.tv/jcarverpoker just after 3 PM. Somerville, playing as ‘jcarverNJ‘, currently has just over 5,000 people watching him play a $20 deepstack NLHE event. 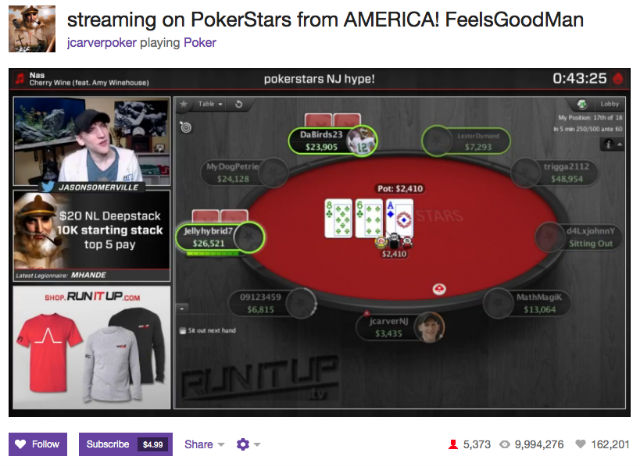 3:01 PM: Just after the clock struck three o’clock, PokerStarsNJ hit another milestone, topping the 400-player mark for the first time. As the afternoon approaches and more of the 9-5 bridge-and-tunnel crowd make their way home, this number should see a bigger jump.

2:50 PM: The PokerStars media event at Resorts Casino & Hotel has all of the big name Team Pros on hand to show off the new PokerStars NJ product. One of those players is Jason Mercier and he even managed to bring along his dog, marshmallow.

1:00 PM: It appears that at least on Day 1, PokerStars is quickly becoming the top site. A look at the lobby of competing sites shows PokerStars as the leader.

12:16 PM: Mainstream media is starting to pick up on the scent. The Associated Press just released a story about the re-launch of PokerStars in New Jersey and mentions the possibility that the Garden State might need to start working with other states for this thing to really take off.

New Jersey has been seeking reciprocal compacts with other states and even other countries to offer Internet gambling with larger combined prize pools, but so far it has only succeeded in taking small steps toward that goal.

11:29 AM: The excitement of PokerStars being in just one state is spilling over to surrounding states – even if the play isn’t. Players in the Pennsylvania Poker Community are talking about making the trip into New Jersey to play – one player did so during Soft Launch and was pretty impressed by the product, calling the software “by far the best offered in NJ right now”. 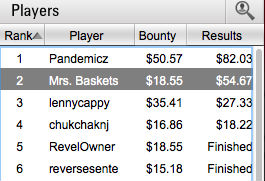 10:34 AM: The first official tournament now has a winner with ‘Pandemicz‘ taking down the $15 No Limit Hold’em (Six Max, Turbo, Progressive SuperKO). ‘Pandemicz’ beat out PocketFives members ‘Mrs. Baskets‘ and ‘LennyCappy‘ to win $82.03 plus $50.57 in bounties.

10:23 AM: While the cash games are picking up and multiple tournaments are now running, there are still no ZOOM tables running.

10:15 AM: Check out our PokerStarsNJ FAQ for many of the answers to questions you might have about the return of PokerStars to the United States.

9:57 AM: New Jersey native Vanessa Selbst is apparently contemplating moving back to her home state. 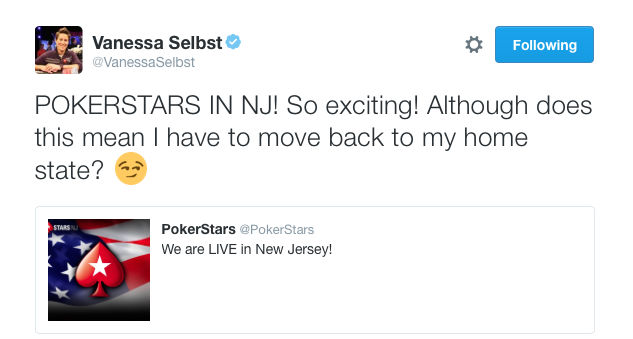 9:30 AM: Registration is closed on the first official tournament on PokerStarsNJ. The $15 No Limit Hold’em (Six Max, Turbo, Progressive SuperKO) got 27 entries, pushing the total prize pool to $364.50 – well past the $250 guarantee.

There were two other tournaments scheduled for earlier in the day, but both were cancelled after not making the minimum number of players.

8:33 AM: More and more players are finding their way to the site. Lobby shows 62 players playing and two full $1/$2 Six Max NLHE tables. The first guaranteed tournament of the day is set for a 9 AM start and has three players currently registered.

7:57 AM: It’s no surprise that PokerStars has put the full weight of their Team Pros behind the launch. While Jason Somerville is scheduled to stream from New Jersey later on Monday, another Team Pro is making his way there now.

.@PokerStars is back in the USA!!!! Real money is open for play in NJ and I am on my way there. #excited

7:41 AM: PocketFives member Steven Madara, the #17 ranked player in New Jersey, is up early and playing. Madara, playing under the screenname ‘FadeOrHoldz‘, is seated at a $1/$2 Six Max NLHE table.

7:30 AM: A little over an hour into the day and there are 32 active players on the site. The most popular tables are $0.05/$0.10 Six Max NLHE where three tables were running.

6:13 AM: PokerStars issues a press release announcing they have passed all New Jersey Department of Gaming Enforcement soft launch requirements and are now 100% live in the Garden State.

“We could not be more proud to bring PokerStars to New Jersey. Working with our partner, Resorts Casino Hotel, we look forward to providing the most exciting, innovative and secure gaming experience to New Jersey,” said David Baazov, Chairman and CEO of Amaya, PokerStars’ parent company.