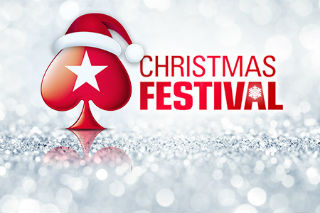 The holiday season is officially upon us and PokerStars New Jersey is ready to brighten everyone’s spirits with the PokerStarsNJ Christmas Festival including freerolls, deposit bonuses and a $100,000 guaranteed main event.

$60,000 is in play as part of the All-in Shootout Freerolls, which are running every Sunday this month. Players are able to qualify for these shootouts by completing a poker challenge that can be found in the Challenges window of the PokerStarsNJ client. $15,000 will be awarded each week in these freerolls.

Additionally, any player who deposits $30 using the promo code ‘CASHMEGA’ is eligible for a prize up to $10,000 starting the week of November 28. In order to win the top prize, players are encouraged to deposit each week to give themselves the best chance. PokerStarsNJ will also be giving away $30 to all players participating in every 5,000th or Milestone hand. There is no limit on the amount of Milestone hands dealt so players are eligible to play and win as many as possible.

Sign-up now for PokerStarsNJ.com and you’ll receive a lifetime license of PokerTracker 4 (Hold’em or Omaha) and a PocketFives T-Shirt, a combined value of over $100. Details here.

Finally, with the Christmas holiday falling on Sunday, December 25, all Sunday Major tournaments have been moved to Monday, December 26. The Monday Majors will have a 20 percent increase in all of the guarantees.

The upcoming promotions should be an exciting time for PokerStarsNJ as its players. As Team PokerStars Pro Chris Moneymaker put it, “Playing online at PokerStars has led to one of the best experiences of my life. Who knows, one of the Christmas Festival tournaments or games could be the start of an epic ride for another talented new player.”

Anyone looking for additional information should go to the Christmas Festival page.