This is certainly big news. While there are other companies out there providing online poker software, no other company on its own comes close to the influence that PokerTracker and Holdem Manager have had on online poker players. Therefore, this news might potentially affect more players worldwide than the recent Amaya acquisition of PokerStars and Full Tilt due to the plethora of players already using PokerTracker and Holdem Manager.

If you are wondering how this might affect you, you are not alone. When the two biggest companies in any industry combine, customers want to know how it will impact them and we don’t expect any difference here.

So what do we know? The two brands will continue to operate separately, with a strong commitment to both products for the indefinite future. PokerTracker and Holdem Manager will be utilizing their combined 22-year history in poker software by consolidating their individual company’s strengths, including intellectual property, management teams, staff, and other resources.

With two companies of such size combining, one has to wonder where future competition will come from and if prices are about to surge. 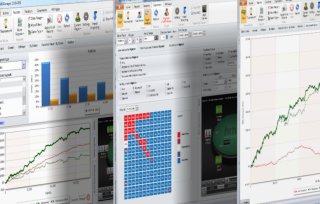 To that end, the merged company said it does not plan on increasing prices and believes new versions of its software will not slow down: “Plans for an eventual release of PT5 and HM3 have not changed because of the merger. However, those products are currently only in the very early stage of planning. An actual release date for either product has not been estimated.”

Innovations to PokerTracker and Holdem Manager are expected to flourish due to the new merger. One such example is HM Cloud Beta. The software promises to deliver a cloud-based HUD, enabling your computer’s resources to be free to do other things such as add more tables and more sites. The two development teams not only plan to work on this product coming out of beta as fast as possible, but also use this technology to develop Cloud software for PokerTracker.

Support is also expected to improve; however, this may take some time. Since each product was developed separately, it is understandable that support teams will not be cross-trained overnight. However, in the long-term, it is expected that a combined support team will improve user support options and hopefully provide a better overall experience.

Time will tell how this merger of the two of the largest poker software companies around will affect the community. In the short-run, we will be able to enjoy the software we love, and players and new customers will still have the same options at the same prices. In the long-run, it is uncertain that the combined forces will develop products and updates faster as a combined company than they might have done as competitors pushing each company to out-do each other.