When the inaugural World Poker Tour Heads Up Poker Championship was announced last month, the tournament clearly had the chance to become one of the most exciting events of the year. Tom Dwan, Phil Ivey, Nick Schulman, and Nick Petrangelo were among the names initially confirmed for the $25,000 buy-in event.

On Monday, poker fans got their first look at the rest of the 32-player field. Along with the four aforementioned superstars, the field includes multiple former WPT Player of the Year winners, high stakes cash game regulars, and some of the best players in the game today.

But as the 16 opening round matches were announced, there was one that should have poker fans around the world salivating.

Polk, who most recently beat Daniel Negreanu out of $1.2 million in their 25,000-hand heads up match, has three WSOP bracelets to his name, and was once considered one of the best heads up cash game players in the world. Dwan meanwhile has long been considered one of the brightest minds in poker and spends a significant amount of time playing the highest stakes available online and live.

There are a few other first round matches that should be appointment viewing for poker fans. Ivey takes on German poker pro Manig Loeser in his first round battle while Stephen Chidwick is set to face Andrew Lichtenberger and poker vlogger Brad Owen will play Canadian Daniel Dvoress.

The event, which is being played online on the Poker King app June 18 – 22, will be streamed on the World Poker Tour YouTube and Twitch channels with Joey Ingram serving as host. Each match is a best-of-three format until the final which will be a best-of-five.

Other first round matches:

Gamers and Influencers Taking Their Shot

The invitational event also includes a number of key figures from outside the world of poker. Possibly the most high profile member of that group, DJ Steve Aoki, will go one-on-one with Dan Smith in the opening round.

Rumay ‘Hafu’ Wang is an esports streamer known for playing World of Warcraft, Hearthstone, and most recently Among Us on her Twitch channel which has 1.3 million followers. Wang is matched up with chess superstar, Woman FIDE Master Alexandra Botez. Botez has 850,000 Twitch followers of her own.

Danny ‘ShipHtur’ Le has 757,000 Twitch followers. The former League of Legends pro will face off with former WPT Player of the Year Anthony Zinno in the opening round.

There are also two players who qualified for the event via a $300 buy-in super satellite on Poker King. The as-yet unnamed players will be the opponents for Darren Elias and Tuukka ‘buttonclickr’ Sevänen in the first round.

While the tournament is a WPT event, it is not a Main Tour event and will not count towards Player of the Year and the winner will not be added to the Mike Sexton WPT Champions Cup. 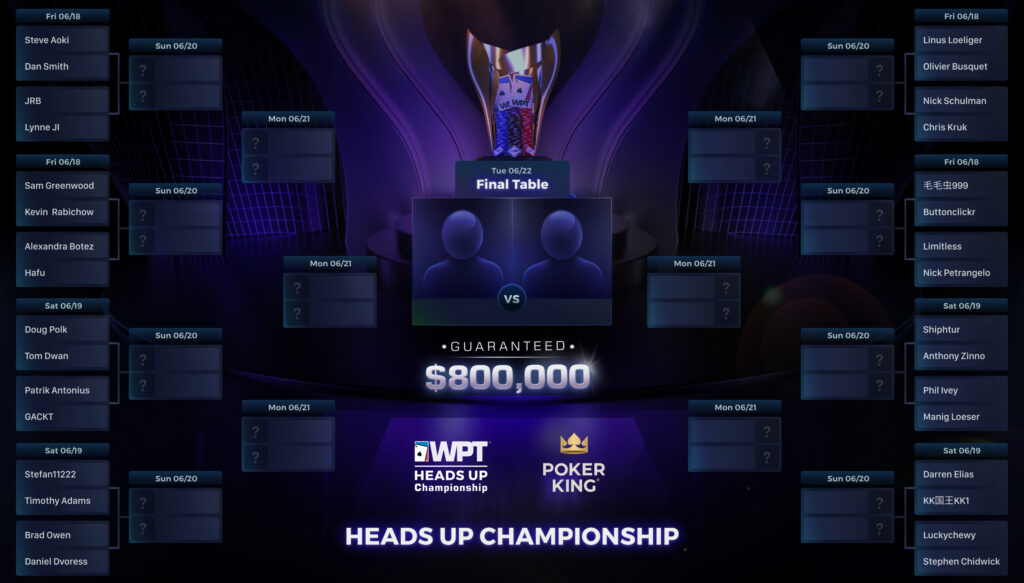