At the Hard Rock Hotel in San Diego, 100 teams competed in the live finals of the Fantasy Basketball World Championship, or FBWC. And at the end of the day, ‘pwnasaurus‘ came out on top for $1 million with a score of 310 points, defeating the second place finisher by nine.


James Harden was the top scorer on the winning team with 60.75 points on DraftKings, or one-fifth of ‘pwnasaurus’s’ winning score. Harden had 29 points and 14 assists in a double-double and was owned by one-third of the field.

Two big separators for ‘pwnasaurus’ were Patrick Beverley and CJ McCollum, who not only hit big, but were also owned by just 8% and 13% of the field, respectively. Beverley had 10 assists, 18 points, and contributed across the stat line for 45.75 points on DraftKings, the third highest score on the winning FBWC team.

McCollum had 30 real life points, the most of anyone on ‘pwnasaurus’s’ team, and finished with 43.75 points on DraftKings after dishing out an additional six assists.

Late on Friday night, Dirk Nowitzki and Draymond Green, owned by 22% and 27% of the field, respectively, helped the eventual winner pull away. As coverage on RotoGrinders said, “‘pwnasaurus’ has taken the lead based on some Nowitzki and Draymond goodness and he’s starting to run away with it, as he is 17 points up on the one player, ‘underjones’, who has any legitimate shot at catching him. ‘underjones’ has Curry and Barnes in addition to Nowitzki left.”

Green finished with 35 points on DraftKings after registering eight assists and 15 points, while Nowitzki was one rebound shy of a double-double.

One of the biggest stunners was Anthony Davis, who got injured during Friday’s game, hurting the 31% of the field that rostered him. According to Rotoworld, Davis is dealing with a sore knee and is headed for tests to determine more. 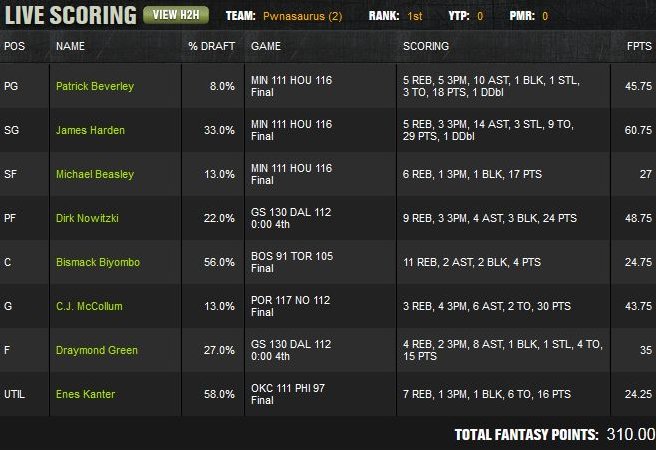 Silvestri received a giant custom check and then posed for pictures to a chorus of Flo Rida’s “My House.”

Jones won $5 million in January after scoring 352 points in the FFWC finals, which took place up the coast in Los Angeles. He finished second in a special “skills competition” during the FWBC finals and scored an autographed Andre Iguodala jersey.