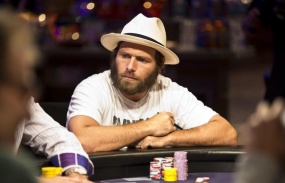 Last month, Anderson filed for divorce from the 47-year-old poker player in California, citing irreconcilable differences. Soon after, Salomon filed his own claim that Anderson had deceived him into marriage, according to TMZ. While not elaborating on the alleged deceit, court documents show that Salomon asked the judge to deny Anderson spousal support payments. 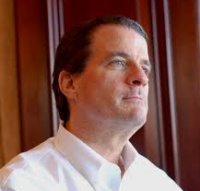 Anderson claims that her estranged husband banked $40 million from Andy Beal (pictured), the billionaire poker player featured in the book, “The Professor, the Banker, and the Suicide King.” The book details high-stakes matches between Beal and several well-known poker players who pooled their cash in an attempt to bust their wealthy opponent.

The former Baywatch actress alleges that Salomon has been lying about his state of residence, claiming live in Nevada, where there is no state income tax, but in reality making his home in Malibu, California, a state which levies a 13% income tax on residents. To avoid being getting hit by that extra tax burden, Salomon paid cash for a $4 million house in Nevada and sent his assistants to make purchases in Nevada with his credit card, a ploy to make it look as if he lived in the Silver State, claims Anderson. 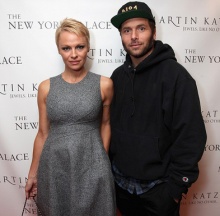 The pair have a tumultuous history together, getting married, then divorcing several times. The couple first tied the knot in Las Vegas in 2007, but had the marriage annulled a few months later. The couple reconciled and remarried in 2014, but the union hasn’t lasted long.

In court documents, Anderson recently requested and received a restraining order against Salomon, claiming that the poker pro was both physically and verbally controlling and “financially abusive.” She continued, saying “Salomon’s anger towards me has increased and escalated, and his attempts to contact me both directly and indirectly, is disturbing my peace.”

Interestingly, Anderson and Salomon both starred in two of the most infamous sex tapes of all time, albeit with different people. A contractor working for Anderson and then husband, Molly Crue’s Tommy Lee, broke into the couple’s vault and leaked the no holds barred sex tape which was filmed on the pair’s honeymoon in 1995.

Salomon, for his part, turned Paris Hilton into a household name after homemade footage of the couple’s sex life spread throughout the Internet. 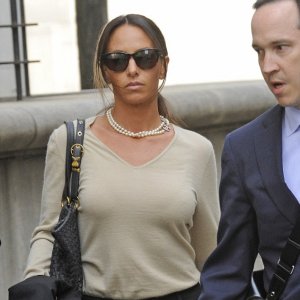 Apart from “being famous for being famous,” the 47-year-old has also been revealed as one of the players regularly attending the private high-stakes games hosted by Molly Bloom (pictured) for Hollywood A-list actors like Tobey Maguire and Ben Affleck.

In a book she wrote about her experience, Bloom recounted one exchange between Salomon and Affleck during one such game. “Hey, yo, did that Jennifer Lopez’s ass have cellulite on it, or was it nice?,” he asked. “It was nice,” Affleck replied as the table laughed.

Salomon was again featured for his poker ability after taking fourth place in the $1 million buy-in Big One for One Drop. The poker pro busted out of the high-stakes tournament after losing a flip to the eventual winner, Dan Colman.

If Salomon had indeed won $40 million from Andy Beal last year, that would put the billionaire’s recent poker losses at a staggering $45 million. In January, Todd Brunson went to battle with Beal in Bobby’s Room at the Bellagio, pocketing $5 million in a single session from Beal.

Anderson herself is known to enjoy poker and allegedly met Salomon in a game where she lost $250,000 to her future husband.