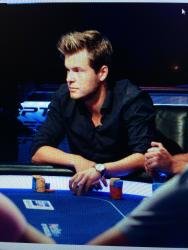 The high-stakes version of Event #8 of the ongoing PokerStars Spring Championship of Online Poker was a $700 No Limit Hold’em Heads-Up contest that brought out 765 players. In the end, it was only fitting that two PocketFivers chopped heads-up.

In the biggest pot of the heads-up match, lukethafluke(pictured) called a bet from fellow PocketFiver RuiNF on a board showing 8-3-7-5-10 with three hearts. RuiNF showed Q-J of hearts for a flush and lukethafluke folded, giving the former an edge in chips.

Thirty minutes later, lukethafluke was all-in with Q-J against RuiNF’s J-10 of diamonds. The action flop of K-Q-6 with two diamonds gave lukethafluke middle pair and RuiNF flush and straight draws, the former of which hit when the queen of diamonds peeled off on the turn. The river was a red five and Portugal’s RuiNF claimed the SCOOP title in the heads-up event after a two-way chop:

This was a pretty heavyweight fight, as the two PocketFivers have combined for nearly $7 million in tracked online poker MTT winnings. lukethafluke is currently #3 in the PocketFives Rankings, while RuiNF is #177, but was ranked as high as #10 in 2012. Each has over $2 million in winnings just on PokerStars, the largest online poker site in the world, with RuiNF being about $100,000 shy of $3 million.

RuiNF earned his first SCOOP title in the process, while lukethafluke recorded his second top-three finish in a SCOOP tournament. The event took 14 hours to complete, so it was a marathon for everyone involved.

If playing in SCOOP events sounds like a hoot, No Limit Single Draw 2-7, Pot Limit Omaha Heads-Up, and No Limit Hold’em Ante-Up events are all in store on Thursday. Each has low, medium, and high-stakes versions to suit your bankroll. Visit PokerStars for the full schedule.

Finally, we should mention that PokerStars is hosting a special satellite to Event #30-M of SCOOP this Sunday, May 11. It’s a $5.50 tournament that’s open to anyone in the PocketFives community and the top 10 finishers will get tickets to Event #30-M. These tickets are in addition to the regular prize pool, so there’s a ton of value to be had.