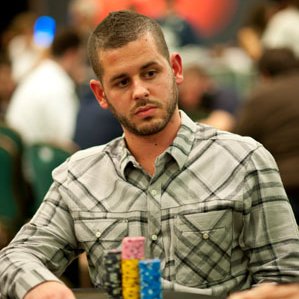 Ryan toetagu Fair from Coral Springs, Florida found himself in a familiar spot after bagging up 3.5 million in chips on Day 5 of the 2014 World Series of Poker Main Event, which put him in 22nd place with 79 players remaining. He ultimately finished in 48th place for $152,000.

While Fair has had his “fair” share of success in the live felts, he has done even better online, where he plays on PokerStars and Full Tiltunder the handle toetagu. Fair has almost $3 million in tracked online poker tournament cashes in his PocketFives profile. His claim to fame came in May 2010 when he won the $10,300 SCOOP Main Event at PokerStars for $1.16 million.

The action at this table was more aggressive than most of the other tables due to the dynamics. As an example, Smith opened a hand from middle position to 90,000 in chips with blinds of 20,000/40,000. Benger, known to be aggressive, wanted to take advantage of his position and 3bet Smith to 240,000. Fair cold 4bet Benger to 560,000, which both Smith and Benger folded to, giving him a nice pot near the end of the day without risking seeing any cards.