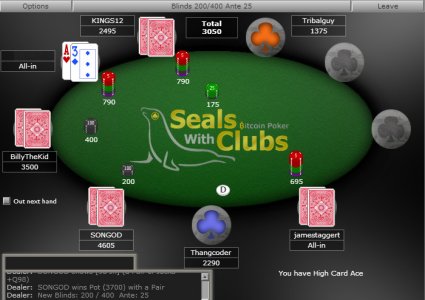 In breaking news, cashouts on the now-defunct bitcoin online poker site SealsWithClubswill end on May 5, according to a message posted on the SealsWithClubs website. The memo, which was posted on March 5, read in part, “The cashout system will only be maintained for another sixty (60) days. All activity on the sealswithclubs.eu domain will cease on May 5, 2015. After this date, it will not be possible to retrieve your balances, connect an email address to an account, or reset your password.”

It added, “Please request your cashouts immediately and pass along this notice to others if you know any former players.” That’s exactly what we’re doing, so please alert other players who have balances on SealsWithClubs that the window is quickly closing for them to cash out.

Players with questions about the cashout process are advised to email h@sealswithclubs.eu. However, after May 5, no support of any kind will be available, according to the site: “When the cash out system is brought down, there will no longer be any support for, or activity on, the sealswithclubs.eu domain. Please do not delay.”

SealsWithClubs shut down on February 20following “several events related to operational security” that resulted in the site operating in a “perpetual state of jeopardy.” Site Chairman Bryan Micon later released a video saying that police officers showed up to his house in Nevada on February 11 to serve a warrant related to SealsWithClubs and bitcoin poker. He was not charged with any crime, but has since traveled with his family to Antigua and re-launched a new bitcoin poker site.

Micon said in the video, “After I was led out in handcuffs in my underwear, it was pretty clear it was proper to leave sooner rather than later. I didn’t want my daughter to grow up in a police state where creativity is often met with guns and handcuffs.”

Hellmuth Headlines The Five Biggest Storylines From Week Two of the...