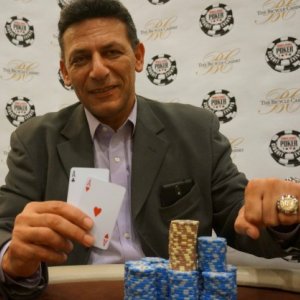 Until the 2014 Main Event, Martirosian was not well known outside of California, with all of his $376,000 of live poker tournament winnings occurring within his home state.

One of the key hands for Martirosian in the 2014 WSOP Main Event occurred near the end of Day 5 with the blinds at 20,000/40,000. The action started with Martirosian raising to 90,000 in chips in early position and getting called by Oscar Kempssitting to the right of him, Ali Eslamion the button, and Yorane Kerignard from the small blind.

Kerignard tried to steal the pot when he bet 185,000 on a flop of Qd-Qs-7c. Martirosian was holding Ah-Qh and raised the action to 450,000. Eslami called from the button with Qc-9c, setting up a big action hand, while Kerignard folded, leaving the action to be heads-up on the turn.

Martirosian shoved his remaining 1 million chips on the turn of 2s, which sent Eslami thinking. After a few minutes, Eslami called for his tournament life and saw he was drawing three outs for the win or six outs for a tie. Eslami was sent to the rail when his hand did not improve when the 5c appeared on the river, while Martirosian watched his stack more than double to 3.5 million.