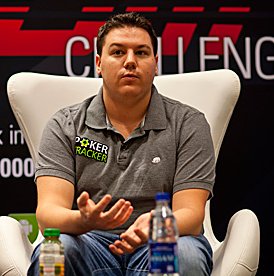 At the time of writing, there are seven players left in the $10,000 Pot Limit Hold’em Championship at the World Series of Poker in Las Vegas. Your leader by a sizable margin right now: longtime PocketFiver Shaun shaundeeb Deeb (pictured).

In a monster hand early at Saturday’s final table, Deeb 4bet before the flop and fellow PocketFiver Jason JAKoon1985 Koon called all-in. When the cards were revealed, it was Deeb’s cowboys against Koon’s A-Q, and Deeb hit top set on the flop to extend his lead. Koon had a Broadway draw that didn’t hit and he busted in ninth place after Deeb ultimately hit a full house despite beginning the day as the chip leader.

Deeb extended his lead after betting 104,000 in chips on a board of K-6-2-J-J. Paul paulgees81 Volpe, who had initially checked, tanked and called only to see Deeb show another full house.

That hand sank Volpe’s stack, but he rebounded shortly thereafter by sending Ismael Bojang to the rail with kings against A-K. The board came queen-high and Volpe stacked a half-million in chips, good for third on the leaderboard behind Deeb and high-stakes pro Jason Les.

This group is pretty sick. Merson is a former WSOP Main Event winner and has two bracelets. Deeb and Volpe are both former #1 players in the PocketFives Rankings. Stein owns a PLO bracelet and Les is one of the top high-stakes players around. Sammartino is #5 on the all-time money list for Italy, according to the Hendon Mob. Good luck, everyone.