Shaun Deeb is known as a master of mixed games. He’s won four World Series of Poker bracelets, each of them in a different variant. His first was in Pot Limit Hold’em, his next came in Seven Card Stud. In 2018, when he won WSOP player of the year, he took home two titles – one in PLO and another in No Limit Hold’em.

“Contra.” Not a poker variant, but the popular run-and-gun shooter first produced by Konami in the late 80’s during the quarter arcade boom. The game was an early success but really took off in popularity when it was then brought over to Nintendo Entertainment Systems in 1988. For Deeb, playing “Contra” on his NES eventually became one of his early video game go-to’s and helped open him up to the world of gaming.

“I always loved video games,” Deeb said. “When ‘Fortnite’ got big there was a whole poker contingency [that played]. We had a group, about 10-15 guys from poker – a couple who had never played video games – we got on every morning, it was fun. Bunch of shit talking, played props and stuff…I mean, I love gambling and video games, it’s a great combination for me.”

Enter Nelson Laffey, careerist collector of all things “nerdy” from video games to “Magic the Gathering” to “Pokémon” cards. Deeb and Laffey first met while playing poker in New York. They quickly bonded and discovered that they have more in common than just poker. Deeb heaps praise on the “really, really sharp” Laffey calling him “pretty much the most knowledgable guy” in the collectibles sector.

“I just happened to run into him at a casino, he’d just gotten into poker and we became friends right away. Now, we hang out all the time and he’s one of my closest friends,” Deeb said. “He has always been big into Magic [the Gathering] and Pokémon and stuff and he approached me a couple of years ago. He said ‘hey listen, I’m buying these games, you should give me some cash, we should be partners, and I’m going to buy us a bunch of stuff.’”

That “bunch of stuff” turned out to be vintage, factory-sealed video games. Convinced, Deeb cut Laffey a proverbial check, and off Laffey went, determined to succeed in his quest. They scooped up all the titles they could find that kids from the ’80s and ’90s obsessed over: “Final Fantasy”, “Double Dragon”, “Deja Vu”, “Street Fighter II” and, of course, “Contra.” In total, according to Deeb, the investment brought in roughly 100 pieces. 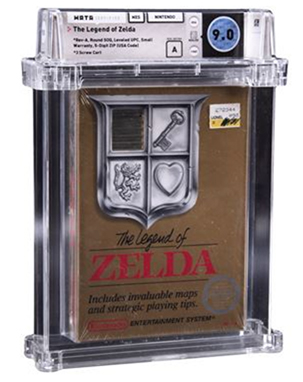 But the crowning piece, that title that brings their whole collection together, is a top-graded, third-print copy of the Nintendo classic “The Legend of Zelda.”

“It is arguably my favorite piece in my collection,” Laffey said. “It’s arguably going to be – if not is – the most coveted piece throughout the entire lot. I don’t think I’ve ever met somebody that says I don’t like ‘Zelda.’”

Laffey’s suspicions are easily confirmed. A recent post on TMZ.com shows that a factory-sealed copy of “The Legend of Zelda”, donated to Goodwill in Connecticut (very similar to the graded copy in Deeb and Laffey’s collection), recently sold for a record $411,278.

Deeb explains that after building up the collection over the past few years, a message from end boss Cliff Josephy connected him with Ken Goldin. Goldin, a former online grinder and PocketFiver who played under the name ‘isuck123’, is the founder of Goldin Auctions, an online auction house specifically tailored for collectibles, sports cards, and memorabilia.

Titles like “The Legend of Zelda” along with “Pokémon”, “Super Mario Bros.” and “Sonic the Hedgehog” are currently sitting at the top of the heap for investors. A look at Goldin Auctions sees a top-graded copy of “Zelda” currently sitting with a bid of $75,000 – with roughly two weeks left to bid.

Deeb and Laffey’s lot is being sold as individual pieces, some this month (September 18 is the final chance to bid) and others in November, to allow investors and collectors to pick and choose what they’d like to add to their own collection. Deeb is excited to see what the collection fetches, however, investing in video games has become more than just a transaction for him. He’s discovered an investment of passion, one that connects him to his childhood and something he plans on continuing to pursue.

“I love the games, it sucks to get rid of them but I know that the market’s really hot and so we’re going to unload our games and try to buy more. We’re trying to make a profit, but we love the games. I remember as a kid playing Contra and my wife used to play Zelda so it’s been really cool to have them in our collection.”

Deeb enjoys video games, and clearly enjoys gaming in general but when it comes to what’s next for the investment, he insists that will be his partner’s call.

“It’s a booming industry and with so much inflation going on, I’m so happy that I had part of my net worth tied into these games. And, you know, if we make money that’s cool. If we lose a little, no big deal…,” he said.

“But I think we’re going to make a lot of money.”