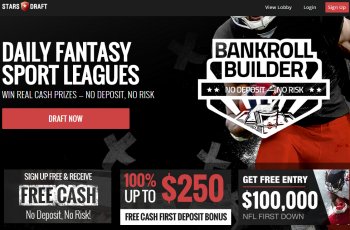 On Friday, StarsDraftofficially launched. The site, formerly Victiv, is owned by Amaya Gaming, the parent company of PokerStars, and continues to promote one of Victiv’s promotional staples, the Bankroll Builder. Week 1 of the NFL season officially begins on September 10 with a game between the Pittsburgh Steelers and the now-not-Tom-Brady-less New England Patriots.

Text on the new StarsDraft site read, “We are excited to announce that Victiv has partnered with Amaya and the PokerStars brand to bring you the new StarsDraft.com. We look forward to continuing to offer the same high standard of customer support, player engagement, and product innovation under our new brand. All of your user details, balances, bonuses, and account information will remain the same.”

Whereas sites like FanDueland DraftKings have multi-million-dollar prize pools on deck for Week 1 of the NFL, StarsDraft is keeping things a bit smaller. Its largest tournament has a $100,000 prize pool and costs $10 to enter. At the time of writing, there were 211 entries out of a maximum of 11,250.

Why Sign Up for StarsDraft?
When you sign up for StarsDraft, you’ll get five free Bankroll Builder tickets. Either enter directly after you sign up or click the “Play Free” link in the contest lobby on the “Free Bankroll Builder” row. StarsDraft is also offering a 100% up to $250 free cash first deposit bonus. Finally, new users get a free entry into the $100,000 NFL First Down Week 1 game that has a top prize of $10,000. Get started here.

According to Legal Sports Report, from a player’s standpoint, the experience at StarsDraft is relatively unchanged from Victiv: “The lobby is fundamentally unchanged. Login details remain the same. Player balances, bonuses, and tickets have also been moved over. Loyalty status remains as it was prior to the change. Referral and affiliate links still function, but should be updated.”

StarsDraft accepts players from most US states. Sign up for StarsDraft here and get started!