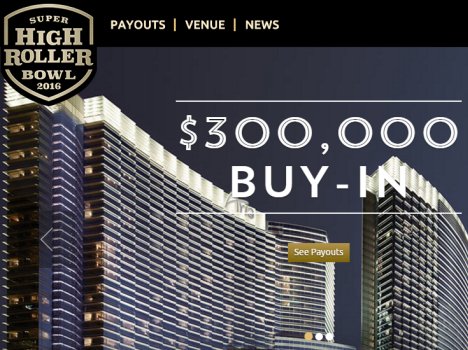 It’s not every day that a $300,000 buy-in poker tournament comes along. It’s one thing to play with your friends around the kitchen table for pizza money, but it’s a whole different animal competing for an estimated $5 million first place prize. Oh, and there’s a shot clock.

As Clint Stinchcomb, CEO of Poker Central, put it, “There are few poker events that can change the landscape of the game overnight – the Super High Roller Bowl is one of them. The 2016 Super High Roller Bowl will be even more exciting than last year’s.” It starts on May 29 at 2:00pm local time and runs through June 1.

The top eight all-time tournament money-earners are scheduled to be in attendance, according to Super High Roller Bowl officials, including the likes of Daniel Negreanu and Phil Hellmuth. The tournament is capped at 49 players and is expected to sell out. Aria will begin accepting non-refundable $30,000 deposits on January 22.

If the Super High Roller Bowl maxes out, it’ll mean a $15 million prize pool and $5 million to first place after an extra $300,000 is added to the pot by sponsors. Aria has reserved 14 seats for its own high-rollers, leaving 35 seats for the general public. As such, Stinchcomb and company expect the 2016 Super High Roller Bowl to sell out rather quickly. Anyone age 21 or over is welcome to buy in; it’s not an invitation-only field.

Here are the projected payouts, assuming a field of 49:

Poker PROductions will once again produce the event. Its president, Mori Eskandani, relayed, “Like last year, this prestigious tournament is bound to be one of the most talked-about events of 2016. We are excited to return to produce this live event.”

The final day of the Super High Roller Bowl (June 1) is also the opening day of the 2016 World Series of Poker, also in Las Vegas. Cash games at the Rio for the WSOP actually begin on May 31, but Day 1A of the Colossus II and the Casino Employees Event kick off on June 1.

Down the Las Vegas Strip, the action at Aria will be dealt seven-handed. As such, if the Super High Roller Bowl sells out, seven tables of seven players each will be seated when it begins.

2015 marked the first running of the Super High Roller Bowl. It had a $500,000 buy-in last year and attracted a field of 43 players. Brian ‘tsarrast‘ Rasttook it down for $7.5 million, defeating Scott Seiver heads-up for his fourth seven-figure score. The top six finishers in the 2015 Super High Roller Bowl all earned over a million bucks and the action was beamed to Americans on the NBC Sports Network. Rast won a $25,000 satellite to qualify, making his win all the more improbable.

The 2016 Super High Roller Bowl will feature a 40-second shot clock with five one-minute time banks each day. Seven levels will be played on Day 1 and Day 2; the field whittles down to a final table on Day 3.