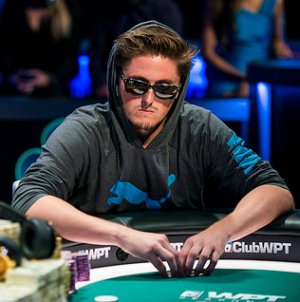 Out of the six members of the World Poker Tour’s Bay 101 Shooting Star final table, five were part of the PocketFives community. In the end, Taylor taypaur Paur (pictured) came out on top and took home a rock solid $1.2 million.

Paur came into the final table with the second largest stack and sent Ravee Mathi, the only person who wasn’t a member of PocketFives, home in sixth place. On a board of J-6-5-6-5, Mathi shoved all-in and Paur called with 8-5 for the win. Mathi showed A-8 in the hand and earned $168,000.

Thirteen hands later, Faraz The-ToiletJaka was all-in with 4-4 and up against Jacob bazemanBazeley’s pocket tens. Neither player improved and Jaka busted out of his fourth WPT final table in fifth place for $216,000. Paur then sent Sorel Imper1um Mizzi home after coming out on top in a race with pocket fives against A-J. Paur was ahead the entire way and hit a five on the river to boot, sending Mizzi home in fourth place for $310,000.

On the 171st hand of final table play, Bazeley pushed all-in with K-7 of clubs, but Paur was once again the executioner, this time with A-10 of spades. Paur flopped one ace and rivered another to make a boat and send Bazeley away, $461,000 richer for his wear. It was Bazeley’s second career WPT final table.

Paur had a 2:1 lead over Isaac mr. menlo Baron entering heads-up play and it took all of nine hands to determine a winner. Baron shoved on the river of a 9-7-2-3-5 board with A-9, but Paur snap-called with 10-9 of hearts for a flush. Bay 101 marked Paur’s first WPT final table. Here’s how the group cashed out:

Paur won a World Series of Poker bracelet in 2013 in a $1,000 No Limit Hold’em event. Online, he has won two FTOPS events, the PokerStarsSuper Tuesday and Sunday 500, and the Full Tilt Sunday Brawl and $1K Monday, just to name a few. Congrats to him on his first WPT title!