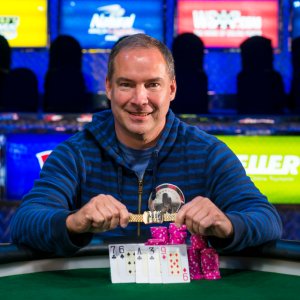 In August 2010, ESPNpublished an article saying that Ted Forrest (pictured) had won a “shocking” weight loss bet with Mike Matusow. The site quoted Forrest as saying, “We were at the Commerce a few months ago, we’d just had dinner, and I felt full and fat. I weighed about 188 in clothes. I bet him I’d weigh under 140 and he was like, ‘No, it’s impossible,’ so he laid me 20-1 that I couldn’t do it by July 15 and another $1 million against $100,000 that I couldn’t do it by September 24.”

The results: by July 15, Forrest had reached his target weight, leading Matusow to be quoted as saying rather bluntly, “I made that bet because I didn’t think it was feasibly possible.” Matusow added that he didn’t have the $2 million required to settle the bet and instead, according to ESPN, arrangements were made for $5,000 per month to be paid for 18 years.

Flash-forward to last week, when Forrest Tweeted the following about the 2010 bet:

.@CardPlayerMedia Correcting the numbers: @themouthmatusow has payed me $70.500 of the 1.8million he owes me for the weight loss bet #4years

In case you’re wondering, by the way, how Forrest was able to shed almost 50 pounds so quickly, he told ESPN, “I ate less. I exercised more, cut out sugar, went to raw and organic vegetables, cut down meat. I was running and walking a lot, lifting and circuit training four days a week. I didn’t want to build too much muscle, but I needed to build a little keep my metabolism up.”

The total weight Forrest lost, according to PartyPoker, was 48 pounds in three months, or 16 pounds a month.

Matusow and Forrest are both among the 10 finalists for this year’s Poker Hall of Fame class. The pair has combined for 10 World Series of Poker bracelets. Forrest won back-to-back-to-back bracelets at the 1993 WSOP, emerging victorious in Events 11, 12, and 13, while Matusow final tabled the Main Event twice in a five-year span stretching from 2001 to 2005.