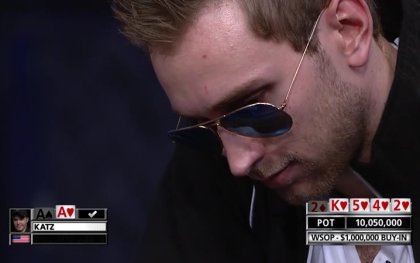 As you might know, on Tuesday night, PocketFives was camped out at Borgata in Atlantic City watching the finale of the first ever live PocketFives Open. Accordingly, we missed the premiere of ESPN’s coverage of the Big One for One Drop, which created such a buzz in the mainstream world that we felt compelled to record a rerun and write about what ESPN commentator Lon McEachern argued could qualify as the “worst beat in the history of tournament poker.”

The Big One for One Drop took place several weeks ago as part of the World Series of Poker and featured 42 players putting up a $1 million buy-in. One of them, PocketFiver Connor blanconegroDrinan (pictured above), called all-in pre-flop with pocket aces in a hand against Cary Katz, who also had aces.

It seemed like a sure bet for a chop. In fact, ESPN poker commentator Norman Chad kept spouting lines about the hand and why it was taking so long, including “The edge here belongs to Katz, who holds the ace of spades, the prettiest card in the deck.” Chad was right… almost.

Meanwhile, Scott Seiver, who was also at the table, pointed out, “I’m not saying this is going to happen, but this is how I busted with 11 left in the $10K last week.” Talk about bad karma. 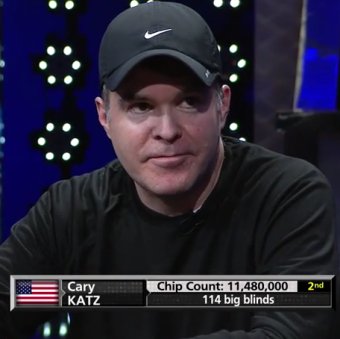 Drinan and Katz were both 2% to win heading to the flop, which had two hearts and bumped Katz to 5% to win. The turn was – you guessed it – another heart, improving Katz to 20% to win. Reigning One Drop champion Antonio Esfandiari then uncomfortably said, “I feel like it might.”

The river was the deuce of hearts, instantly drawing profanity and leaving McEachern saying that the hand might be “the worst beat in the history of tournament poker.” As Chad chimed in, “A million-dollar buy-in wiped out with aces versus aces.” Drinan was sent to the rails and Katz (pictured) raked in a very lucky pot, moving up to second in chips with 114 big blinds.

The hand prompted a front page article on Yahoo on Wednesday, the day after the first two hours of the One Drop aired. Outlets like the Toronto Sun, USA Today, and SI.com all wrote about it and my wife, when I told her I was writing about this hand for PocketFives, said, “I saw an article and can tell you what happens.” That’s how you know it’s big.

One YouTube version of the hand had a stunning 5.3 million views, which you can add to by clicking here.

The One Drop continues next Tuesday on ESPN, which provided the images used in this article.