The theme for Week 3 of the 2021 World Series of Poker was making history.

This year’s series was already going to be a historic one with it being held in the fall and the “current conditions” under which it is being held. But this week, all of the drama and history were made on the felt.

This week was all about superstars of the game showing off their elite skills. Phil Hellmuth added a major chapter to his legacy, Anthony Zinno built himself a clubhouse for one, and Adam Friedman pulled off what was previously thought impossible.

So, check out what went down this week with the five biggest storylines from Week 3 of the World Series of Poker.

It’s been nearly impossible not to see Phil Hellmuth in WSOP headlines over the past two weeks. Between his deep runs, final tables, and his troubling tirades this has no doubt been a Hot Hellmuth Autumn. Well, if last week we saw the breakdown, this week we saw the break out as Hellmuth ended up taking down Event #31 ($1,500 No Limit 2-7 Lowball Draw) for $84,851 and his record-extending 16th gold bracelet.

“I’ve been fighting so ****ing hard for this bracelet for so long,” Hellmuth said right after his emotional win.

But he also said he’d get back to the bracelet chase “immediately” and that’s exactly what he did, jumping in the $10K Dealer Choice tournament. Two days later, Hellmuth found himself at his fifth final table, with the chip lead, and ready to go back-to-back to win bracelet #17. Unfortunately for The Poker Brat, he got heads-up against the current king of the $10K Dealers Choice, Adam Friedman, who eliminated Hellmuth as the runner-up.

Although Hellmuth didn’t instantly win #17, it’s undeniable that Hellmuth is having one – if not the – best World Series of Poker of his career. With five final tables and a bracelet to show for it, he’s currently in prime position to compete for the 2021 WSOP Player of the Year and he’s put to bed the narrative that he’s just a “one trick pony” (as Norman Chad might say) as a NLHE large field specialist.

With Second Series Bracelet Anthony Zinno Starts His Own Club

Just days after being berated by Phil Hellmuth and clinching his third career gold bracelet in the $10K Stud event, Anthony Zinno went on another run in Event #27 ($1,500 H.O.R.S.E.). In the end, Zinno bested the 594-player field and became the first double bracelet winner of the 2021 WSOP, adding another $160,636 to his bankroll.

“I’m very proud that hard work has put me in a position to allow this to happen,” Zinno said after the win. “It’s completely unexpected.”

Zinno has indeed put in hard work, in 2016, just ahead of that year’s World Series of Poker, Zinno told PocketFives that he was putting in hard work learning mixed games. And all of those years of hard work are indeed paying off.

Now Zinno is the lone member of an exclusive club. He’s the only player to have won four World Series of Poker bracelets and three World Poker Tour titles helping him arrive as one of the most decorated players in the game today.

Adam Friedman Does The Impossible

It’s tough enough to win one World Series of Poker tournament. Imagine winning that same tournament in back-to-back years. That’s incredible. Now, do that…take a year off for COVID…come back and do it again. Simply impossible.

But that’s exactly what Adam Friedman did in the $10,000 Dealer Choice and he’s the only player in history to do it.

Making it an even bigger accomplishment, the $10K Dealers Choice is considered one of the toughest tournaments in both quality of competition and skill level needed to win. Players need to know roughly 20 games that can be picked at any given time.

Friedman, now a four-time bracelet winner, has written a chapter of WSOP history that is unlikely to ever be matched and in a couple of hundred days, he’ll have a chance to expand on his legacy by defending his title for a record third time. 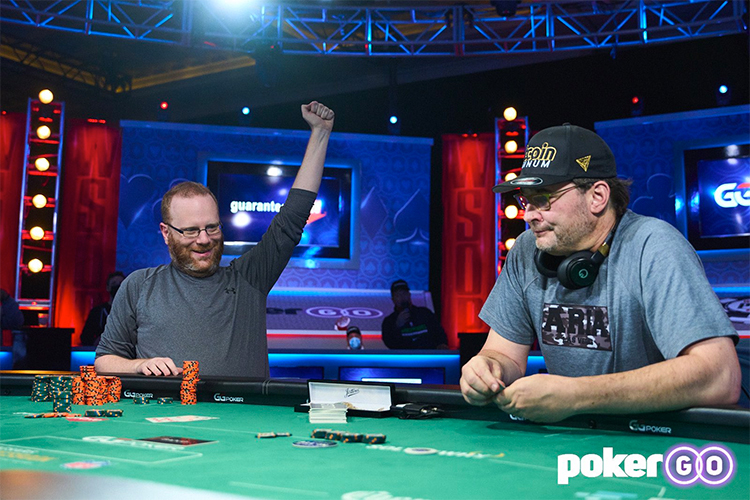 A late-night tweet said it all. With the hopes of attracting (vaccinated) international players when the U.S. eases up on travel restrictions on November 8, WSOP officials have added two additional starting flights for the 2021 Main Event.

The Main Event, which officially kicks off on Thursday, November 4 with its first opening flight, now has a total of six starting days, two Days 2’s, and, as usual, the entire field will meet for the first time on Day 3 which is on Thursday, November 11. There are some things to note depending on what flight a player decides to enter. For example Day 1A, 1B, 1D all play Day 2 together while Day 1C, which plays on Saturday, November 6 will wait a full four days before joining Day 1E and 1F on Day 2 on Wednesday, November 10.

What’s a little more confusing is that as of this writing, nearly a full week after it was announced, the website has yet to be updated with the new schedule. But not to worry, all the details can be found right here on this tweet:

Finally, the ten finalists for the Poker Hall of Fame were announced this week with three first-time nominees and a host of legends of the game vying for this year’s single induction.

Michael Mizrachi, Bertrand ‘ElkY’ Grospellier, and the late Layne Flack have all made the shortlist for the first time. For Mizrachi and ‘ElkY’, their first nomination comes with their first year of eligibility.

It’ll be a tough choice for living members of the Hall with other notable players including Ted Forrest, Eli Elezra, Mike Matusow, Antonio Esfandiari, and Chris Ferguson also on the ballot. Joining them from the “builder” category is Matt Savage (his sixth nomination) and PokerStars founder Isai Scheinberg.

The Poker Hall of Fame adds a new member on November 17.