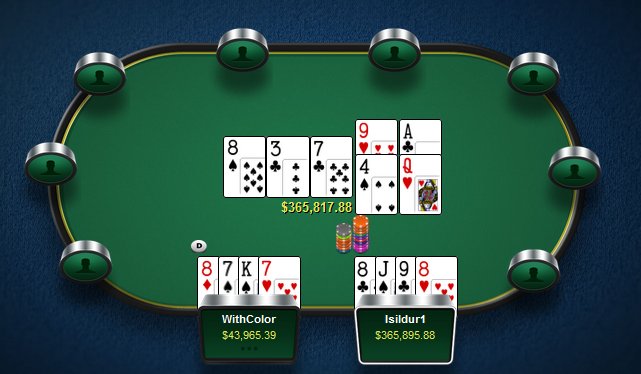 RaiseOnce is none other than next year’s Poker Hall of Fame shoo-in, Phil Ivey. They were in a hand with another player, who quickly got out of the way pre-flop. Otb_RedBaron was fortunate enough to flop a set of Queens and was probably loving life when Ivey called his $2,300 flop bet and $10,300 turn bet, but unfortunately for Otb, Ivey had a straight draw on the flop that came through on the turn. When Ivey moved all-in on the river, Otb_RedBaron couldn’t help but call and lose his stack.

It’s Phil Ivey again, this time against Ben “Ben86” Tollerene in Pot Limit Omaha. Isildur1 was also at the table, but he and another player folded pre-flop when Ivey and Tollerene started raising. It was an action flop, as both players had heart flush draws. All the money got into the pot at that point, but since the flush never came to fruition, Ivey’s pocket Kings won the day. Tollerene was unable to do anything but pair a Queen on the river.

These high-rollers like PLO, huh? With Jd-7d-6c-Kd, Isildur1 allowed JayP to be the aggressor through the turn. Blom had flopped two pair on a Tc-Js-6d board, while JayP had Ad-9c-As-Qd for an overpair and a straight draw. The 5d on the turn gave them both diamond draws, but when the 5h was dealt on the river, Isildur1 played back at JayP until they each only had about $20,000 left behind.

The river card, though, counterfeited Blom’s two pair, as it gave JayP a better two pair. It was a tough call by JayP, but a smart one.

The day after the fifth largest pot we saw earlier, Blom took down Rafael again in PLO. The latter flopped middle set on an 8s-3c-7c flop, while Blom flopped top set. To make matters worse, Rafael had to be feeling even more confident because he had the fourth 8 in his hand, making it much less likely that Blom was hiding the other two. All the chips got in the middle and that was that.