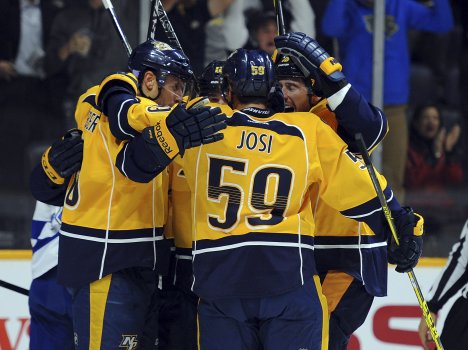 Before we talk about hockey, earlier this year, the NBA partnered with FanDuel. The NBA earned an equity stake in FanDuel in exchange for promotion and such. On Wednesday, NBA Commissioner Adam Silver called for federal regulation of DFS, but maintained that the NBA would not be withdrawing its partnership with FanDuel. The NBA maintains that DFS is not gambling because it is a game of skill.

Silver’s comments are a good sign after a couple of weeks of not good news. This would be a prime opportunity for the NBA to bail and since they’re not I feel better about things.

It’s hockey night tonight and will be every Thursday until next baseball season. This is an interesting slate to me, especially with the news we don’t know yet.

The New York Rangers are the biggest favorite on the board at -210. They have the 3rd highest team total at 2.8. Lundqvist (7.8k on DraftKings) seems like the optimal cash game goalie to me, although he may be a little overpriced, compared to other options, on FanDuel (9.2k). The Coyotes have the lowest team total on the board, so I will be off them completely.

I love the top line for the Rangers of Nash, Stepan, and Zuccarello. The problem is that we don’t know if Stepan will be playing tonight and we won’t know until shortly before game time. He had his wisdom teeth removed yesterday and while they were in there, they removed a couple of screws put in his jaw a year-and-a-half ago during the playoffs vs. Montreal.

Apparently, it hurt having those screws removed, but Stepan is a hockey playing badass that only missed one game after having his jaw broke and screws put in. I expect him to be fine tonight if he plays. He’ll skate faster missing that teeth and screw weight. Fortunately, this is the first game of the night, so we will get information about Stepan before any pucks drop.

The next game is Pittsburgh v. Dallas. Pittsburgh is a -135 favorite and has the 2nd highest team total of 2.9. Interesting to me is that Dallas has a team Corsi For % of 53.1 while Pittsburgh is only at 49.9 through 6 games this season. Dallas had a CF% of 52.2% last season and this year Sharp, recently added to the top line, has a CF% of 57.83. He is also way too cheap on DraftKings at 5.7k. I think that top line of Benn, Seguin, and Sharp for Dallas is a neat GPP play and will go under-owned with Dallas’ low team total of 2.55.

On the other bench, I obviously like the top line of Kunitz, Crosby, and Kessel. They finally showed some signs of life last game and get to play at a fast pace against Dallas. I anticipate them to be highly owned, especially since the 2nd line of Perron, Malkin, and Hornqvist is overpriced and uninspiring. I still love Cole (3k) skating lots of time next to Letang on defense and getting 2nd power play time.

Our favorite spot tonight is Minnesota v. Columbus. Minnesota is the 2nd biggest favorite at -194 and they have the highest team total at 3.1. Columbus doesn’t like to play defense, but they play extra offense. I love Dubnyk (7.2k DK, 8.4k FD) for GPPs and am considering him for cash on FanDuel due to the discount. I expect him to face some shots because what the Blue Jackets don’t do on defense is devoted to extra offensive pressure.

Surprisingly, the Blue Jackets have a Corsi For at 52.4%, which makes me a little wary here, but I will still have plenty of Minnesota exposure. My favorite plays are Granlund (4.4k DK, 4.9k FD) centering the top line and top power play unit and Suter (4.9k DK, 4.3k FD) on defense. Suter is way under-priced on FanDuel and is a must-play in cash games.

Nashville is the next team I am looking at. I always like Forsberg, Neal is heating up, and I like Fisher, who was recently promoted to center the top line. Ottawa is 5th on the team total list and I haven’t delved into them yet but there is likely goodness there. Don’t underestimate Schneider keeping the net for New Jersey. He’s actually one of the best goalies in the NHL, but has one of the worst defenses in front of him.

All of the other teams have pretty similar outlooks. The bottom of the barrel are Arizona and New Jersey; don’t take them. The Kings at San Jose is a pick’em in Vegas with a total of 5, but this game also has the highest Corsi differential. The Kings have a CF% of 62.1% this year – obviously unsustainable – but this same squad led the NHL in CF at 55.3% last year. San Jose is at 52%, right about where they should be; they were 51.3% last year.