Those hoping for Phil Hellmuth and Tom Dwan to reignite their 2008 NBC Heads Up Poker Championship feud may have been disappointed when the pair sat down with commentator Ali Nejad for the High Stakes Duel III (Round 2) “Weigh-In” show. Whereas in boxing or MMA, the combatants posture as to who will have the upper hand, this pre-game hype show saw a pair of players who seemed to genuinely enjoy and respect each other as people, if not each other’s poker game.

As Nejad peppered both with questions about their past encounters on the felt and their evolution (both as players and people) over the past 13 years, he received mostly replies of the duo slinging compliments at each other. Dwan, adamant that Hellmuth is one of the best at playing against amateurs (even better than Daniel [Negreanu]), while Hellmuth reminisced about how he and Dwan have recently palled around, smoking cigars and talking crypto. Hellmuth even called Dwan at age 35, “already a legend.”

The good vibes continued once the cards were in the air. Dwan and Hellmuth kept the conversation going in the early moments with “Durrrr” asking “The Poker Brat” some probing questions about his prior matches and Hellmuth doing his promotional duties for his many sponsors.

Dwan got off to a quick start, flopping a flush on the very first hand holding

flop. But with little to continue with, Hellmuth folded his

and just two hands later Hellmuth took over a chip lead that he didn’t surrender for the better part of two hours.

The first important hand of the match took place in the first hour with Dwan raising the button to 1,200 holding

and Hellmuth defending his big blind with the

. Hellmuth checked in the dark as the dealer spread the

flop, giving Hellmuth two pair and Dwan an open-ended straight draw. Dwan continued for 1,500 and Hellmuth made the call. The turn came the

and Hellmuth checked again. Dwan fired 4,400 and Hellmuth made the call. The river came the

and after Hellmuth checked, Dwan bluffed for 11,000 with nine-high, and Hellmuth snap-called dragging more than 36,000 chips in the middle.

As Dwan began climbing back from his lows, Hellmuth picked up another important early pot. From the button, Hellmuth called the 500 chip big blind with the

and Hellmuth came along. The

flop kept Dwan in the lead and he led for 1,600 which Hellmuth called. The turn was the

and the action checked through. The

hit the river and Dwan led again, this time for 3,000. Hellmuth took a moment and announce a bet of 7,200 and after taking some time, Dwan paid him off, giving Hellmuth a 40,000 chip lead.

Despite the things not going his way early, Dwan never showed any real frustration. He chipped away at Hellmuth and took over the chip lead for the first time since the first few minutes.

From the button, Hellmuth made the call to 800 with the

and Dwan checked his option in the big blind holding

brought Dwan top two pair and Hellmuth both a flush and straight draw. Dwan checked it over to Hellmuth who bet 800 and Dwan promptly check-raised to 3,000, which Hellmuth called. The turn was the

and Dwan bet 4,800 and Hellmuth snap-called. The

came on the river and Dwan bet 13,300 and Hellmuth started talking to himself before finally letting it go.

By the end of the third hour, Dwan had extended his chip lead and was looking for opportunities to take Hellmuth out. It almost came when Hellmuth, with 72k behind, called 1,000 from the button with

. Dwan raised it up to 4,000 from the big blind and Hellmuth made the call. The

flop brought an open-ended straight draw for Dwan and he led for 5,000. Hellmuth clicked it back, raising to 10,000 with his ace-high hand. Dwan made the call and the turn came the

, bringing Dwan a straight. Dwan checked it over to Hellmuth, who bet another 14,000 drawing dead. Dwan considered his options and decided to shove. Hellmuth made the quick fold and Dwan’s lead surged to roughly three-to-one.

“This is f***ing ridiculous actually,” Hellmuth fumed. “Noone’s ever beaten me raising every f***ing button before.” 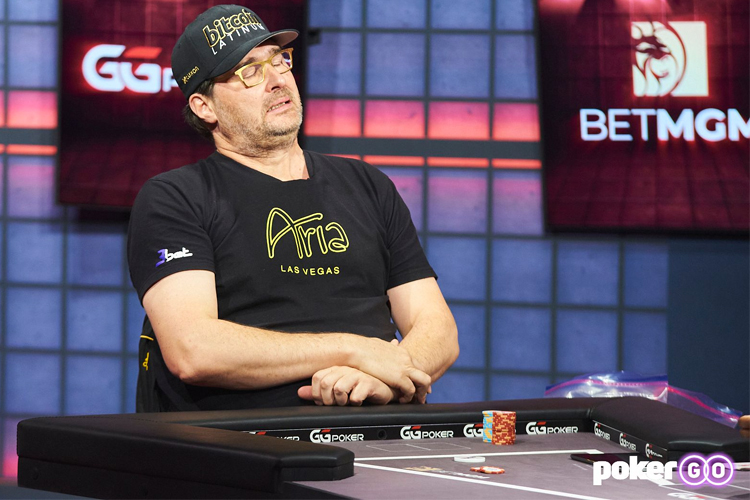 Dwan continued to apply pressure, looking for the knockout blow and moving in with his big draws. But Hellmuth hung around and as he had in matches prior, turned his short stack around. Not only did he draw even with Dwan, but he reclaimed the chip lead for a short amount of time. But eventually, as the fifth hour was coming to a close, Dwan grabbed the lead back as well as a momentum that he wouldn’t let go of.

and Hellmuth checked holding the

and the action checked through. The turn came the

and Hellmuth led out for 9,000 from his 83k stack. Dwan considered and opted for a call with his heart flush draw and live eight. The river came the

, giving Dwan the best hand and when Hellmuth fired 11,000, Dwan found the call, scooped the pot, and built one of his biggest leads of the match.

As Hellmuth paced and ranted, Dwan didn’t reply with the bravado he showed off in 2008. He calmly stacked his chips, like a pro who had been there many times before, unfazed by the antics.

While not the final hand, the one that summed up the match came early in the sixth hour of play. Dwan made it 9,000 to go on the button with

and Hellmuth made the call from the big blind with the

, giving Dwan bottom pair. Hellmuth checked to Dwan who checked it back. The turn was the

and Hellmuth fired for 11,000 and Dwan made the call. The

hit the river and after cutting out some chips, Hellmuth announced a bet of 27,000 – half his remaining stack. Dwan tanked, used a time extension and let out a long sigh. Eventually, Dwan made the call, scooping the pot and grabbing an overwhelming eight-to-one chip lead.

Down to his final 20K, Hellmuth picked up

on the button and limped for 4,000. Dwan checked his

and the pair saw a flop of

. Dwan led out for 5,000 with his middle pair and Hellmuth sprung the trap, moving all-in with his pocket aces. Dwan called the extra three big blinds and was looking for help. Help arrived for Dwan when the

hit the turn, improving him to two pair. Down to his final card, Hellmuth needed help. However, as the

arrived on the river, Hellmuth’s High Stakes Duel unbeaten streak was over and Dwan became the show’s new champion.

Hellmuth now has 72 hours from the end of the match in which to declare if he will challenge Dwan for another match. If he declines, a new challenger will be announced for Round 3. 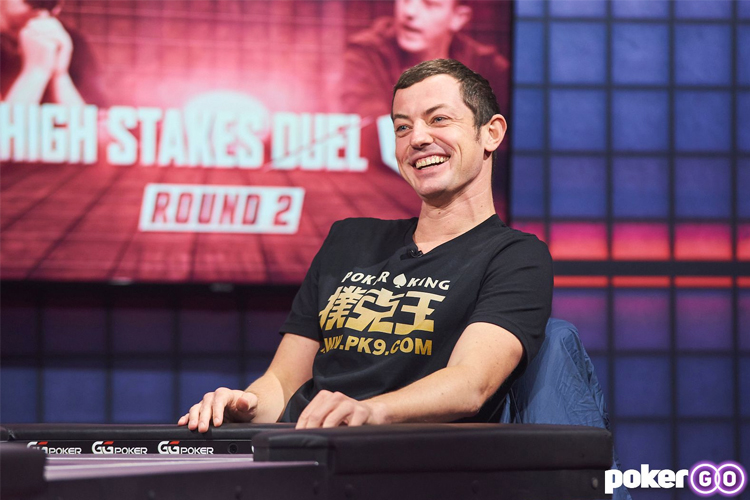