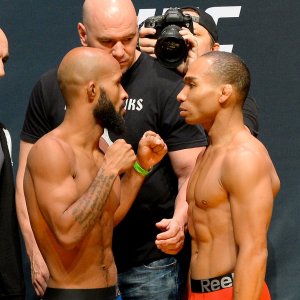 A look into the UFC 191 fights tonight. Note that you can play daily fantasy MMA on sites like DraftKings!

Malegarie is giving up 3″ in height to Silva, but has a lot more experience beneath his belt. He is great at finishing fights, especially by way of submission. His only three defeats have been Unanimous Decision losses. Silva has finished all seven of his victories within the first round. This should be an exciting fight to watch, I think Silva will earn a 2nd round TKO.

Riggs normally fights at Welterweight, but he’ll be fighting up at Middleweight for this bout. Both fighters are well-rounded, but neither fighter has a great resume. I think this fight should be a pick’em. I see it going the distance.

Collard is six years younger, which is worth noting. He’s also heavy-handed for a Featherweight, with 8 of his 14 wins coming by way of knockout. Trator’s last fight was a knockout loss to Mike de la Torre, but before then he was on a 10-fight win streak. Trator normally fights at Lightweight, but he’ll be fighting down at Featherweight. He has good cardio, so I don’t think the cut should be an issue.

Andrade is giving up 5″ in height to “Rocky,” which could be a factor in tonight’s fight. Don’t let Pennington’s 5-5 record fool you. She has fought some tough competition, including a Split Decision loss to Andrade a year-and-a-half ago. In fact, four of her five losses have been by Decision. I think Pennington might pull off the upset here and take down a Decision win.

Rivera is six inches taller than Lineker, but also eight years older. Lineker is 19-2 over his last 21 fights. He normally fights at Flyweight, but he’ll be fighting up at Bantamweight for this fight. Both of these guys are heavy-handed and like to keep it standing, so this will be an exciting fight.

Felder’s only professional loss was a Decision loss to Edson Barboza in his last fight. He’s a creative kick-boxer, with seven of his ten wins coming by way of knockout. Pearson is primarily a boxer with mediocre results. I predict a 2nd round TKO in favor of “The Irish Dragon.”

Chambers is a whopping 15 years older than Vanzant. On top of that, Vanzant is known for her cardio. Vanzant has a great training camp and doesn’t have to fly halfway around the world for this fight. I predict Vanzant will win a one-sided Unanimous Decision.

Blachowitz is seven years older than Anderson. He’s a grizzled veteran who is coming off a Decision loss to Jimi Manuwa. Anderson is a former TUF winner who is looking to get back on track after getting leg-kicked non-stop by Gian Villante, which led to the first loss of his career. I think Blachowitz wins by Decision.

Manuwa is an up-and-comer I’ve had my eye on for a while. His only loss is to Alexander Gustafsson. Thirteen of his 15 wins are by TKO. He has steadily climbed the ranks over the years, but I think accepting this fight is a mistake. “Rumble” is an absolute beast. He just lost his last fight to Daniel Cormier, which was a bad match-up for him. He’s basically a bigger, younger, scarier version of Manuwa. I’ve followed Johnson for a very long time and I’m very confident he will come away with either a 1st or 2nd round knockout.

Both these fighters have been around the block and both are still very relevant in the division. They are both former Champions. Mir is more well-rounded. He’s probably the best submission expert in the Heavyweight division. His boxing has greatly improved as well, most notably in his last fight when he pulled off the upset win over Todd Duffee. Arlovski has crisp boxing and he’s training under Greg Jackson, one of the best in the business. I think this fight could go either way, but one thing’s for sure – it’s not going the distance.

“Mighty Mouse” has been the Champion for a very long time. It’s no surprise that he’s a big favorite. He’s quick and has amazing cardio. Dodson, on the other hand, has heavy hands and might be even slightly quicker. In their last fight, “The Magician” knocked the Champ down three times in the first two rounds, clearly winning the first two rounds. However, Johnson fought back with a lot of heart in the latter rounds, completely dominating the 5th with his clinch work. The key to Dodson pulling off the upset in this fight is to keep his hands sharp, avoid the clinch, and hopefully not tire.