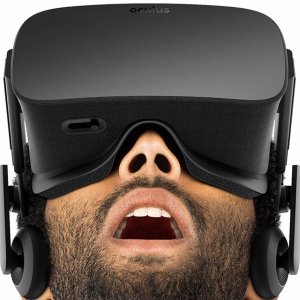 One complaint poker “purists” have about online poker is that it doesn’t feel like real poker. You can’t stare into your opponent’s soul to see if he really has the goods, you can’t count out your chips, and you can’t see and hear the poker room’s atmosphere all around you. According to VRWorld.com, some of that could change in the next few years thanks to rapidly developing virtual reality technology.

For example, there are a number of personal VR headsets in development at the moment, with the leader, the Oculus Rift, set to launch its retail product at the beginning of next year. The Rift has already gotten into the hands of thousands of developers and testers and is already a smash hit.

Without getting too deep into how the technology works, VR headsets like the Oculus Rift envelop the user’s field of view, projecting a video image on two screens simultaneously to give the wearer a first-person, three-dimensional, immersive point of view. The device detects head movement as well, shifting the viewing angle just like in real life; look down and the VR image looks down. Headphones can be worn to get a fully immersive audio experience as well.

Games are the first natural application for virtual reality, but VRWorld speculates that online poker could be a realm into which VR could expand as the technology matures. Imagine sitting down at a “real” poker table, seeing your opponents around you, actually looking down at your hole cards, and eyeballing players’ stacks.

You could turn around in your seat to look at other tables, perhaps check out the tournament clock, or call for a chip runner. Heck, maybe when you log in, you could actually walk into the poker room and sit down at a table.

VR certainly has a ways to go before this will be possible. How difficult is it to link multiple VR players in a single game? Will there be issues merging the VR technology and poker room security? Will it be possible to stream an entire virtual poker room? Even with those and other issues, VR poker does seem like a possibility, but not for a few years. 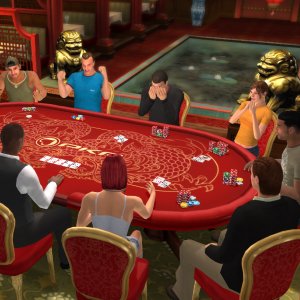 There have been attempts at making online poker more realistic. True Poker launched several years ago amidst the poker boom, giving players a first-person point of view. Hole cards were dealt face down; a player’s avatar would actually look down and peel the corners to see their hole cards. Whenever a player looked at their hole cards, everyone could see that they were doing so. HogWild Poker also featured a similar technology.

Later, PKR (pictured) launched, upping the ante a bit. The table is presented in a three-dimensional environment and players are allowed to select different camera angles. Players can dress their avatars in different ways and even make them emote. Of course, none of those rooms is anything compared to what real VR would be.

One problem with VR online poker would be that it would make multi-tabling basically impossible and therefore completely unattractive to heavy grinders. But, online poker rooms are trying to appeal to casual players more and more and something like this, if it works well, could be perfect. It would inject much more fun into the game and, after all, isn’t poker supposed to be fun?