Vivian Saliba is learning a new game. It’s unlike her beloved Pot Limit Omaha, No Limit Hold’em, or any other that she’s played. It’s the Twitch game and she’s already finding it as challenging and rewarding as any card game in her arsenal.

Saliba has recently decided to convert the time she would have spent playing in live events around the world into bringing the world to her with a budding new poker Twitch stream. Although she’s at the beginning of her streaming journey, Saliba is already finding the ups and downs of interacting with the poker community while trying to play solid poker in front of an international audience.

“Streaming while playing poker has turned out to be far more challenging than what I expected,” Saliba said. “It is very difficult to manage the stream, interact with the chat, keep an eye on new followers, edit and change the scenes, highlight the tables, and of course play poker and talk…sometimes in different languages.”

“It is important to find the right balance and figure out how to do all of those things and still deliver a good level of poker to my viewer and be entertaining at the same time.”

Saliba has been an 888poker ambassador since 2017 and has made a name for herself as an accomplished PLO cash game and tournament player. But she’s made no secret that one of her favorite parts of being an ambassador is meeting and playing with fans and members of the community from all over the planet. With the pandemic putting those live events on hold, she’s decided to channel that energy into reconnecting in a new way.

“The nicest thing about being a poker streamer, in my opinion, is to engage with the poker world. I’m certain that before the pandemic this was already a big plus but especially now, with reduced live poker around the world, this has become even more relevant. This was the way I found to connect with the community.”

Thanks to those live events, Saliba has a broad fan base. Hailing from Brazil, many of her fans are from her home country. But as an ambassador, she’s been involved in events from just about everywhere which gives her chat an eclectic charm, one that as a multi-linguist, Saliba is well-equipped to handle.

“It is amazing to be able to interact and connect with people from all over the world and this is definitely one of my favorite things about the streams. The streams are in English, but I tend to translate things to Portuguese in case someone didn’t understand a certain point and even though my German and Spanish aren’t too good, sometimes I’ll also risk a few sentences in these languages in order to make myself clear to everyone. The best part of having a variety of fans is to build a bigger and more dynamic poker community.” 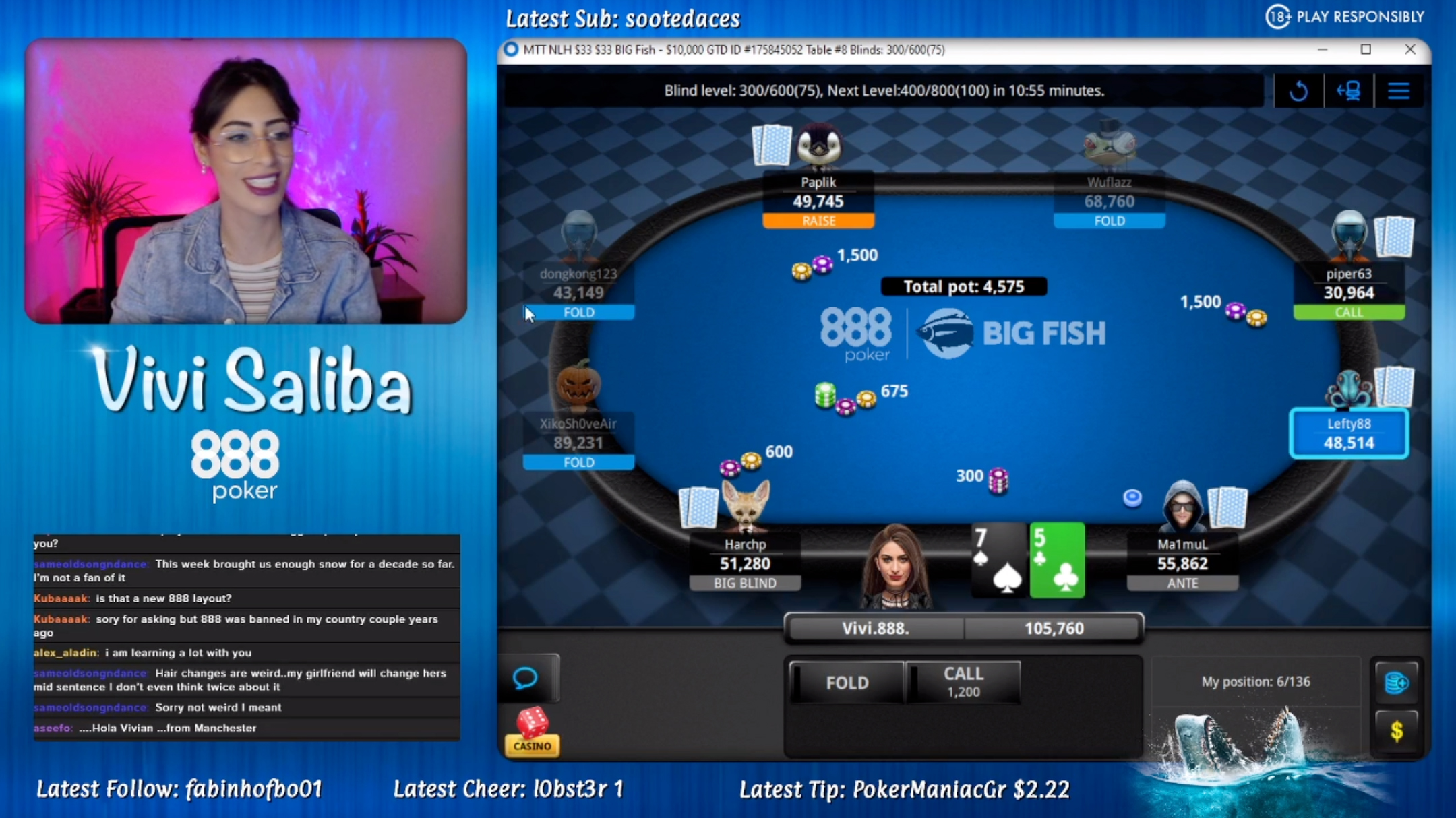 While her Twitch channel is new and expanding every day, so are the challenges that face all streamers. Outside of the tech, there is a certain learning curve that comes with spending hours on end in front of a camera with an audience that may be scrutinizing your every hand. Also, there are trolls.

“Anyone who decides to expose themselves on the internet must be aware of the possibility of negativity and judgment that comes with it. That being said, of course, it’s not nice to face hate or just negativity in general,” Saliba said. “Luckily most of the feedback I receive is nice and my viewers are very supportive. In case of inappropriate behavior…the person will be banned and life goes on as normal.

“Another difficulty is to expose yourself for unlimited hours without really having a break. One of my latest streams lasted 12:30. I had to perform simple and in some ways, private activities in front of the camera such as eating, which is still very odd to me and in some ways makes me uncomfortable.”

Saliba doesn’t plan on being a fly-by-night stream either. In just over a week she gained nearly 1000 followers and her streams have routinely broken the eight-hour mark. She’s been able to keep it fresh by mixing up what she plays but also has some ideas on how to make sure it doesn’t get old for her in the future.

“I love to play PLO and it’s probably my favorite game. But on the other hand, I also understand that many people love [No Limit Hold’em] tournaments and that a deep run can be very exciting for viewers. I intend to mix the types of games I’ll be streaming, possibly I’ll even stream some non-poker related games – for example, chess or pinball – as a way to keep the channel dynamic, entertaining, and to bring new people outside the poker world to it.”

Ultimately though, for Saliba, it comes back to staying connected and celebrating the game of poker with her community.

“On one occasion I had two final tables during the same stream which I finished sixth and eighth place. It is a very nice feeling to celebrate and cheer those on stream. It is almost like a huge virtual rail and you can really feel all the support and love people are sending to you.”

Saliba can be found on Twitch under her screen name: ViviSaliba.