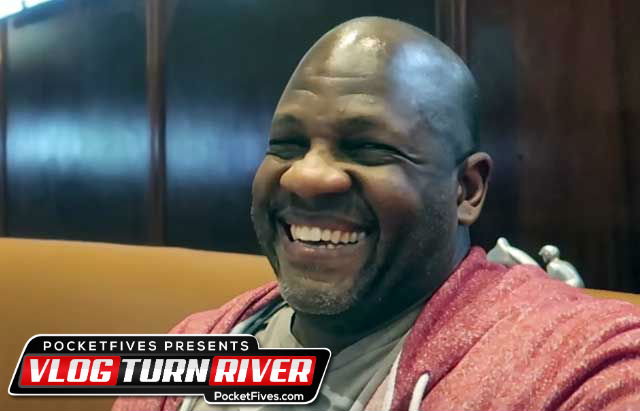 His bag has gone missing. Not the frivolous one that includes unnecessary stuff like clothes or toiletries. The real important items are AWOL – like backup batteries and chargers. Also his laptop.

For 45-year old software architect Jaman Burton, he’s not worried about getting his equipment back for some work project, he’s got content to create for his rapidly-rising-in-popularity poker vlog, The Drawing Dead. Now, here he is in the mecca for poker, Las Vegas, and the airline is informing him that just about all of the equipment he’s going to need to document his latest adventures in poker is nowhere to be found. One look at the scowl on Burton’s face and you can tell – he’s not happy.

Burton, who hails from St. Louis, MO is a part-time poker player, full-time enthusiast and the star/director/editor of one of poker’s fastest growing vlogs on the internet. With a style all his own, he takes his viewers inside his life and inside his sessions giving viewers a brand new way to look at the game. And while he may be on the cutting edge of poker’s new media frontier, he hasn’t always been at the forefront of poker.

“Back when everybody else was having the Moneymaker effect, I didn’t know anything about poker.” Burton said. “During that time – I was bowling a lot. The first time I went to Vegas was to bowl in the United States Nationals.”

As poker exploded into the mainstream, Burton, the bowler, recalls that he still didn’t even know basic hand rankings. It wasn’t until years later when ESPN was airing a marathon of the World Series of Poker Main Event did it catch Burton’s eye. But once it did, he was instantly hooked.

“I was like, that game looks easy…I’m going to try this,” Burton recalls, chuckling at the notion of his younger self.

“I just became immersed in poker. I decided this is what I was going to do, I was going to be a poker pro. That’s back when people were popping out of the woodwork saying ‘Oh, I just deposited seventeen cents and now I’m a billionaire a month later’…that kind of thing.”

‘Now’ is indeed a different time for Burton. After years of doubling down his efforts to learn the game, studying more than playing, he began to find stability in Missouri’s live poker scene. Then, less than a year ago, his poker journey would take an interesting turn.

“I’m in the casino on a random, let’s call it Thursday, nothing special about this day. One of the dealers named Priscilla comes up to me and goes ‘Trooper’s here!’,” Burton said “I’m looking around the room, looking for a cop.”

Burton did. Right then and there at the table. He pulled up one video. Then another. Burton, like when he had accidentally caught the WSOP on ESPN, was instantly hooked. Jaman engaged the veteran poker vlogger Tim ‘TheTrooper97’ Watts for a brief conversation and after wishing each other good luck, Jaman went home and watched even more.

“This thing went off in my head, ‘I wonder how hard this is to do.’ So I took out my phone and I tried it. Me and Jayda (his charming daughter) went to Toys R Us and I tried to vlog my experience. So I put it up on YouTube and I watched it and…it was the worst thing I’d ever seen.”

Undeterred, Jaman decided to give it a second shot, this time with a poker session. He took his phone, his old Mac and iMovie and began vlogging his poker sessions. But this time he didn’t upload them, he shared them only with his friends, each time taking in feedback and picking up new tips and tricks.

“The first vlog I actually released to the public was actually the eighth vlog I’ve ever done. After that, every time out I just got a little bit better. I got a little more into it. So it’s been a learning experience. It’s a lot harder than people probably think it is.”

Now, as he’s quickly approaching his 100th video, Burton has carved out a style all his own. It’s not the hand analysis style of Andrew Neeme, nor is it the man about town attitude of his friend Watts. Burton is crafting an entertaining middle ground that brings together what he loves about both of those vloggers as well as his poker roots.

As a super fan of High Stakes Poker, the TV show, Burton sets out to not just emulate some of the styles of the show in his on-screen graphics but, more importantly, the flow of the show itself.

“In some of my earlier vlogs I did hand analysis and I found it slow. It slowed down the pace of what I was trying to do. I wasn’t really going for that instructional feel, I was just trying to entertain.”

He does this by throwing on his trademark “The Drawing Dead” opening, which mirrors the opening of the popular zombie show of a similar name. With the eye of a film buff, he interjects short movie clips as memes, helping him emote, while film reel transitions show off hand histories as they happen. All the while Burton’s own direct to camera commentary is performed with a kind of stoical poker-face which thinly masks his genuinely jovial nature and love of poker.

His formula is working, as in early February Burton eclipsed 10,000 subscribers to his YouTube channel only to see it surpass 12,000 two weeks later.

Currently with no end in sight to the documenting of his journey, Burton’s finding that what he currently hopes the future holds is not what he once was looking for when it comes to poker.

“My desire to be a full-time professional poker player is not really what I want. I love my job, I love my career and I love playing poker but I don’t have the desire that I did back in 2008 to say ‘I’m going to crush this game and be in the nosebleeds playing with [Patrik] Antonius’…that desire is gone, I don’t think that’s for me.”

So what does he want for the future of his vlog? “I just want to get better. This is very personal to me.

Burton’s in a much better mood now. He heads out onto the Las Vegas strip with the news that his equipment bag has been located and will be returned shortly. He holds up his handheld camera and matter-of-factly shares his next moves – a friendly game at the Westgate, a trip to the Bellagio, perhaps a delightful piece of cheesecake.

After a long grueling day, his viewers watch on he shuts off the camera only to get up the next day, to start filming again and to get back to work on getting just a little bit better.