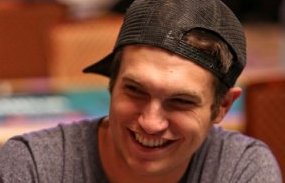 With the event headed into the homestretch, four poker pros have built up an edge over a specially-created poker playing bot in a first-of-its-kind demonstration. On April 24, four players – World Series of Poker bracelet winner and online guru Doug WCGRiderPolk (pictured), Dong Kim, Jason Les, and Bjorn Li – set out in the “Brains vs. Artificial Intelligence” competition being held live at the Rivers Casino in Pittsburgh.

Their opponent was the latest creation of the Carnegie Mellon University School of Computer Science, a poker playing program known as Claudico. The challenge for the two sides was to play 80,000 hands of No Limit Hold’em on laptops linked together and, in the end, whomever had won the most money would be determined the victor. The four humans are playing for a $100,000 bonus.

The competition is unique in that this is the first time a computer program built for poker was taking a stab at No Limit Hold’em. Other programs and competitions from the past, including the University of Alberta’s Polaris, were playing Limit Hold’em, a far more statistical game than the No Limit version. Even the program that supposedly has “solved” poker – Alberta’s Cepheus– has only solved the Heads-Up Limit version of the game.

Over the past 12 days, the four men have played 1,500 hands per day against Claudico, with two of them playing on the floor of the Rivers Casino and the other two in an “isolation room” taking part in their own heads-up matches. The players are all using the same cards against Claudico and, as the experiment draws to a close, the players are the ones cleaning up. 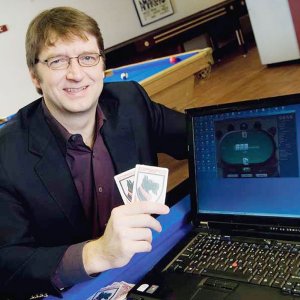 Heading into the final few days of play, the humans have built up a sizeable edge over the Carnegie Mellon team. Overall, the “Brains” have built up a $673,941 lead over Claudico, which, according to Dr. Tuomas Sandholm (pictured) of Carnegie Mellon, would be a statistical defeat for his artificial intelligence program.

What is the purpose of building Claudico, Polaris, or Cepheus, you ask? Artificial intelligence programs have usage far beyond simple games such as poker and chess. The program that defeated chess grandmaster Garry Kasparovin 1997, known as Deep Blue, eventually morphed into the Watson program that crushed former Jeopardy champions in 2011.

By being able to compute a massive amount of information from differing sources, such artificial intelligence programs can improve the lives of humans through the fields of medicine, finance, cybersecurity, and other areas. In essence, the decision-making skills the poker-playing programs use are vital in many areas of daily life.

With only a couple of days of play remaining, it seems that the human race will emerge as victorious in this particular battle. On May 8, a special closing ceremony will be held where the final results will be announced.